This past week was slam packed with activities. So many exciting things, and so many lessons and milestones – I barely know where to begin.

Over the weekend we had family coming in from all over. Georgia, Illinois, Tennessee, Texas and more. We opened our home and had people sleeping everywhere you could lay a head on a pillow in our tiny house. I cooked like crazy, planned for an event, and prayed for good weather. It may have been Columbus Day weekend, but that’s not what we were celebrating. You see, our daughter got married.

Asking a military brat where they are from is usually met with deadpan stares or deep sighs, because most military brats move so often, that they have no real answer for that. My husband is in that category. He claims Tennessee as his “home state” because his family is from there, but he grew up in Germany, New York, Alaska, Georgia, etc…like most military brats. Our kids were given the rare opportunity to plant shallow roots in the Tar Heel State and spent the vast majority of their childhoods there – 12 whole years!

In August, our daughter, Jennifer, went on a trip to North Carolina to visit friends “back home.”

While she was on her trip, I got a phone call one day while I was out with my friend Christy, but said I would call her back when I was on my way home. I hung up and looked at my friend and half-jokingly said “my daughter isn’t coming back to Alabama.” My friend looked at me, shocked – and I told her I think my daughter is getting married.

In mid-August, my daughter was engaged, and this weekend we had the wedding.

I know for some that may seem like a whirlwind wedding but to us, it is just par for the course.

I think there is something about living the military life, and the continual change, moves, insecurity, separations and upheaval of our lives, that when we decide to do something – we get it done.

We are painfully aware of how short life is, how quickly things can change and that waiting for some day to do something can be much too late. We have learned to live out “carpe diem” – because we really have no idea what tomorrow brings. Orders or deployments, moves or loss, “Hello again’s” or “See you later’s.”

And so, we planned a wedding!

We immediately ordered wedding announcements, but didn’t even have the date in stone yet. So of course, me being me, I set up a wedding website! As details and times were inked, I put them in print online. I included local hotel and amenity information, and even a pdf map of where the wedding and reception would be held for all of those coming from out of town.

The wedding was held at the military chapel, performed by one of our chaplains, and the reception was held at the recreational area along the Tennessee River here on Redstone Arsenal. 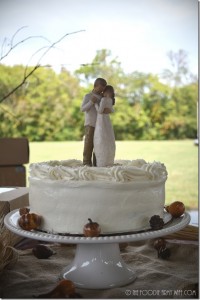 The reception was casual and fun in the fresh air. The catering was done by “yours truly” and cooked in my little kitchen. I made my “famous Carolina pulled pork” with slaw, potato salad, fruit and veggie trays. We got a simple round cake for the bride and groom to cut, and then included a spread of cupcakes – white, chocolate, carrot cake and – this being the South – red velvet. The work crew for setting up and decorating was our friends and family.

We decorated with an autumn flare. Pumpkins and gourds, hay bales and mums. The bride wore a vintage Gunne Sax gown that she bought as a teen at a consignment shop near Fort Wainwright, Alaska. The groom and groomsmen wore jeans, vests and boots. And now that the wedding has passed, I can use those decorations for my own home. Autumn is my favorite season!

The wedding was simple, and elegant and came in at under a thousand dollars in all. We know that a wedding is all about the marriage – the celebration, and not about pomp and impressions. It was perfect. Even the weather cooperated, despite what all the weathermen were saying! 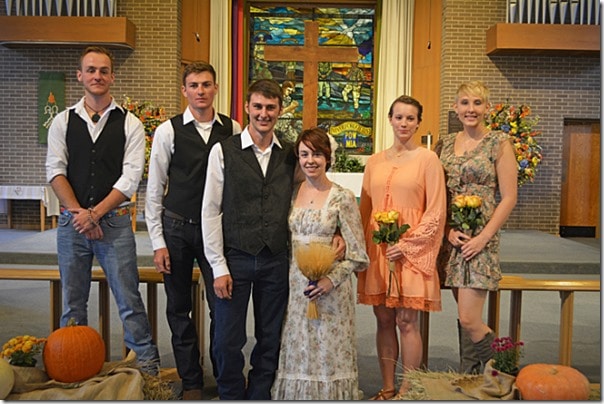 To outside eyes, it was much like any other simple country wedding. But what was really different was the make-up of the guests. The “groom’s side” was mainly made up of relatives – aunts & uncles, cousins and such. 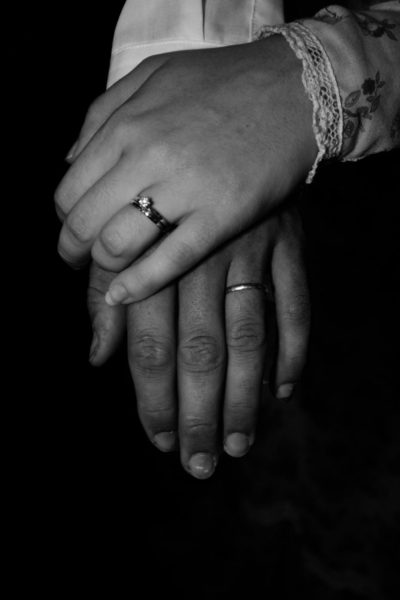 Yes, we had grandparents and cousins there of course. But, let’s just say that our version of “family” looks a little different than most. We often hear about soldiers being “brothers” – but that relationship doesn’t stop at the end of a deployment – or even with the soldiers themselves. I have sisters and brothers – nieces and nephews who hold places deep my heart. I can’t imagine not having them at my daughter’s wedding. It wouldn’t be the same without them. But we share no DNA whatsoever. 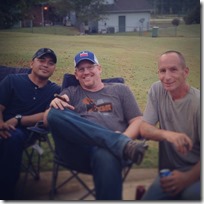 Military life gives you another family that you weren’t born with. We look out for one another and care for each other. We take one another into our homes, lives and hearts. We not only had a wedding, but we had a family reunion. Our loved ones traveled from all over to be here, and it was wonderful to see them. We were shocked to see how big kids got, and how little the parents had changed. We caught up and reminisced about old times. Sharing “war stories” and “remember when’s.”

And the two guys in the photo with my husband there? Yeah…they gave the groom the “Treat her right or we’ll find you!” speech. No joke. Could any bride ask for better “uncles?”

As a matter of fact, next summer we have plans for an “actual” family reunion in Tennessee, to celebrate Mamaw & Papaw’s 50th wedding anniversary – and all of our “extended” – (read: non-DNA sharing) family is invited there too!

With all of this in mind, I had someone ask me if I was falling apart over my daughter leaving me and moving so far away – back to North Carolina. But really, I’m not. Of course I will miss her. But I’m not worried.

We have family there.

Because as an army family – we know that distance and DNA don’t mean a thing.

10 thoughts on “My Daughter’s Wedding”