Last week we went on a trip that covered 1,256 miles, 5 states and 3 military installations. Why? For my son’s Basic Combat Training graduation at Fort Jackson, South Carolina! 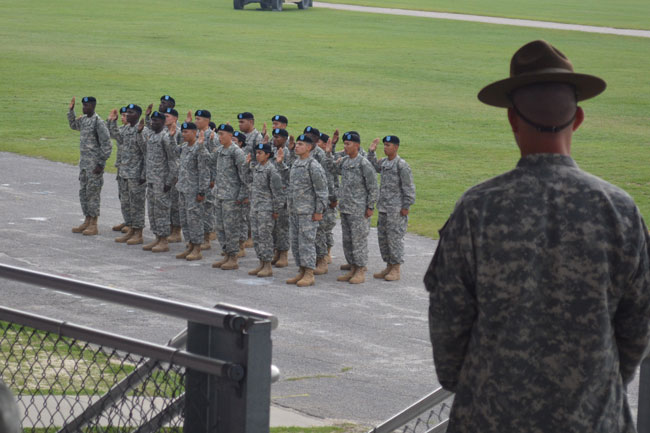 There was a special exhibit of a combat squad coming in. 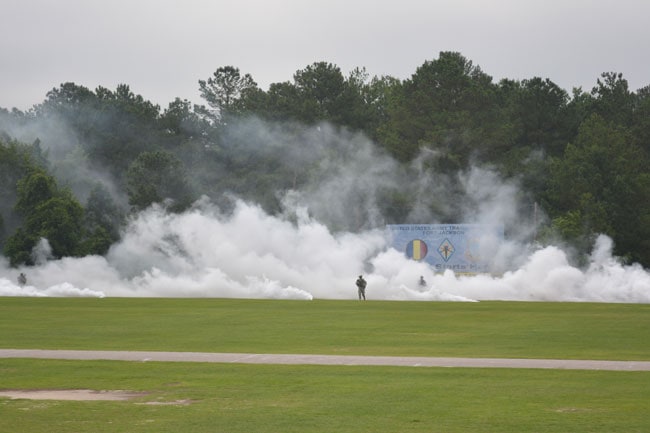 And then after much anticipation…our soldiers!!! 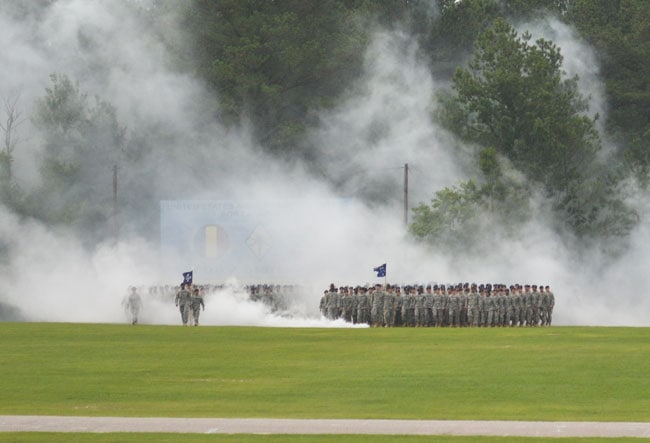 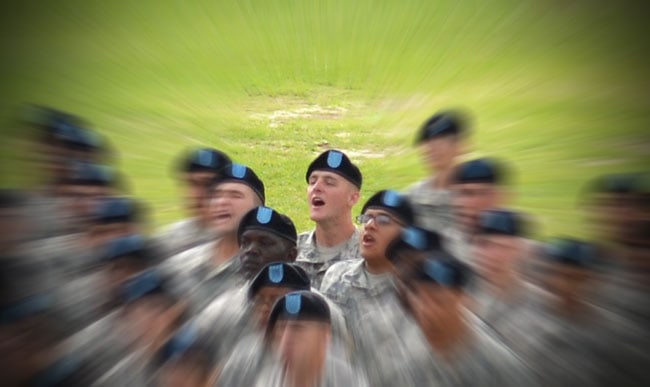 I don’t know who was more excited to see him. After 2 1/2 months of very little contact, and not seeing his smiling face but in a rare photo on the unit’s facebook page, this was heaven! 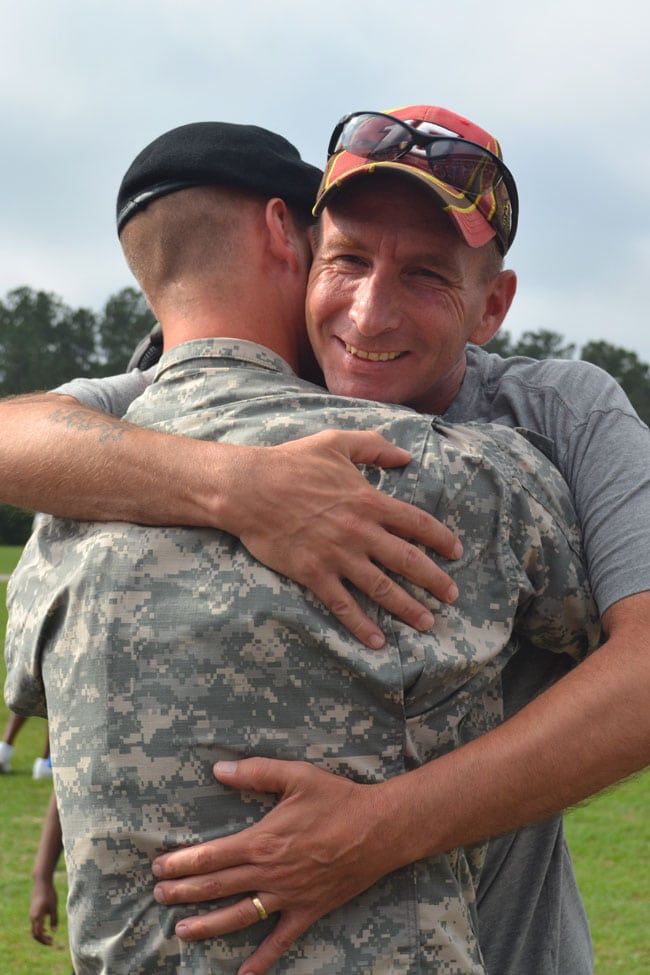 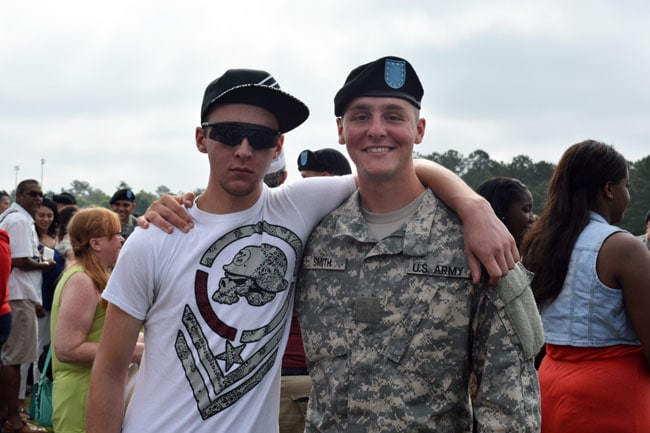 My son’s fiance and her parents came for the trip as well. It was torture to not be able to touch him once we left the parade field. 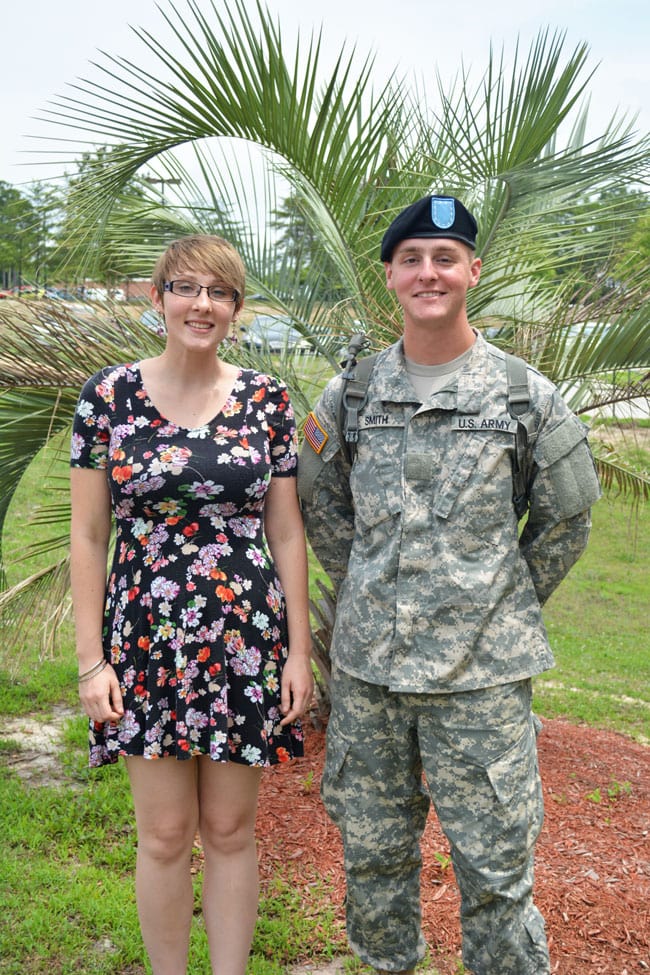 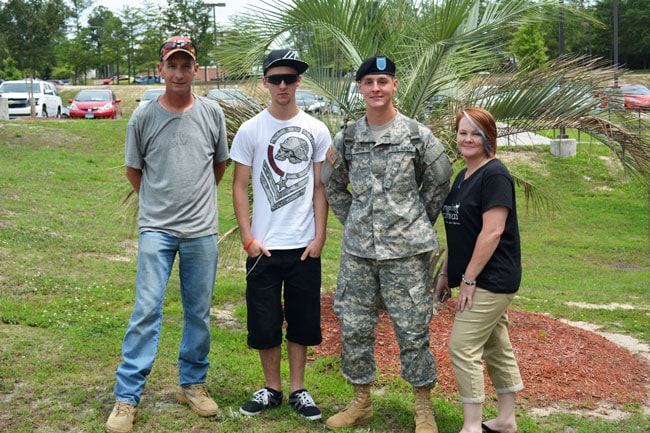 After we picked him up on Family Day, we went and dropped him, Jack and Jacqueline off at the PX while Jaqueline’s parents changed into more casual clothing and Jeff and I ran back to the campground to formally check in. We had arrived after hours and needed to pay for the remainder of the stay.

We made a detour on the way back to the PX and I got Joshua something he had been asking for. Starbucks.

As I walked through the hall in the PX, carrying that tray of Starbucks drinks, you should have seen the look of longing on the faces of the new soldiers. I honestly wondered if I was going to get my son’s frappuccino to him before it vanished in a covert op!

We had some lunch and then went and played a game of bowling. After that, we headed to Jacqueline’s hotel suite where we relaxed, looked at the facebook photos and simply enjoyed spending time together.

And then the day was over, and we dropped him back off at the company. What a day it was, and we couldn’t wait for the following morning!

The whole experience was definitely worth the ice cold showers. Oh, did I mention that the hot water wasn’t working at the camp ground there at Fort Jackson? Brrr!

The next morning was the official graduation ceremony. It began with a little entertainment by the Fort Jackson band as we waited for 0900 to arrive! 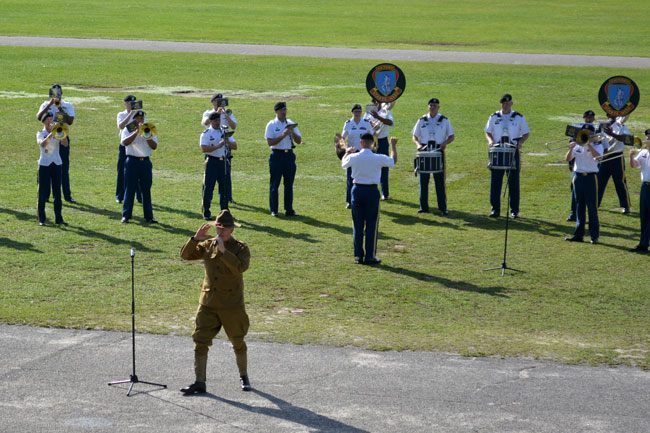 And then we saw them! 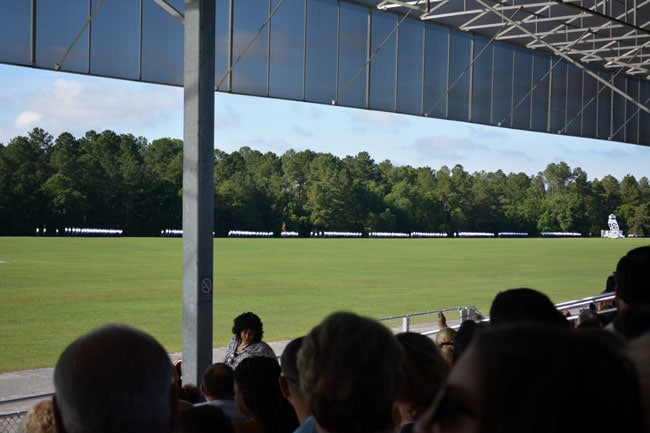 As we scoured the formation to the left, the one my son should have been in – we couldn’t find him anywhere. Why? He wasn’t in it! He was in this special little group in the center. 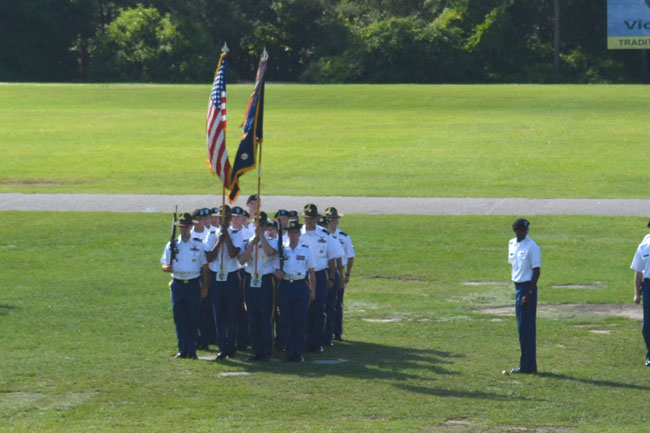 Joshua received a certificate for being the top shooter in his company. Just when I thought I couldn’t be more proud of him. 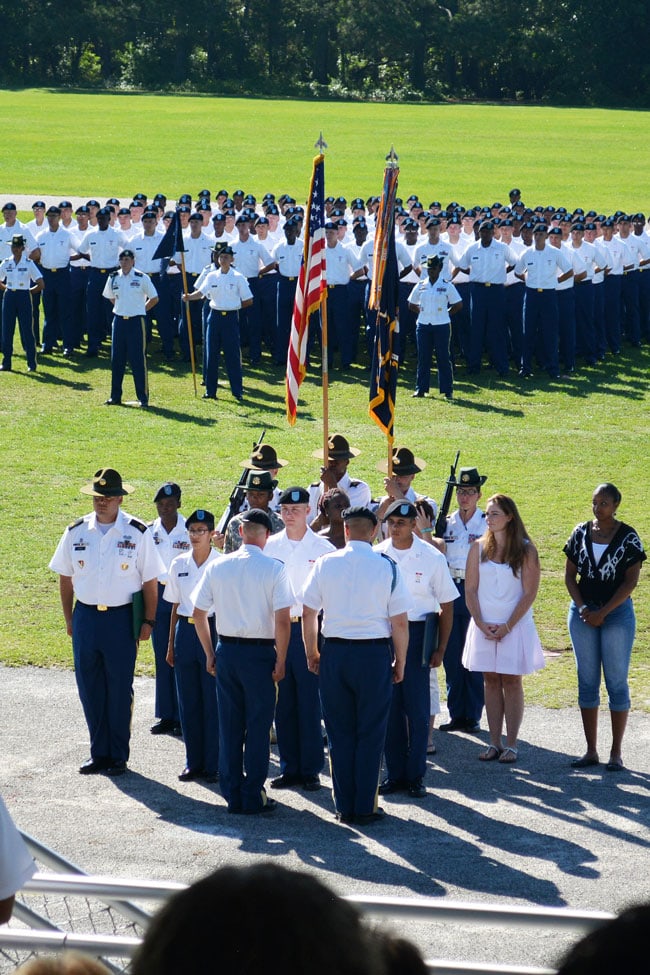 After the ceremony, we had a few minutes to take some photos. Father & son. 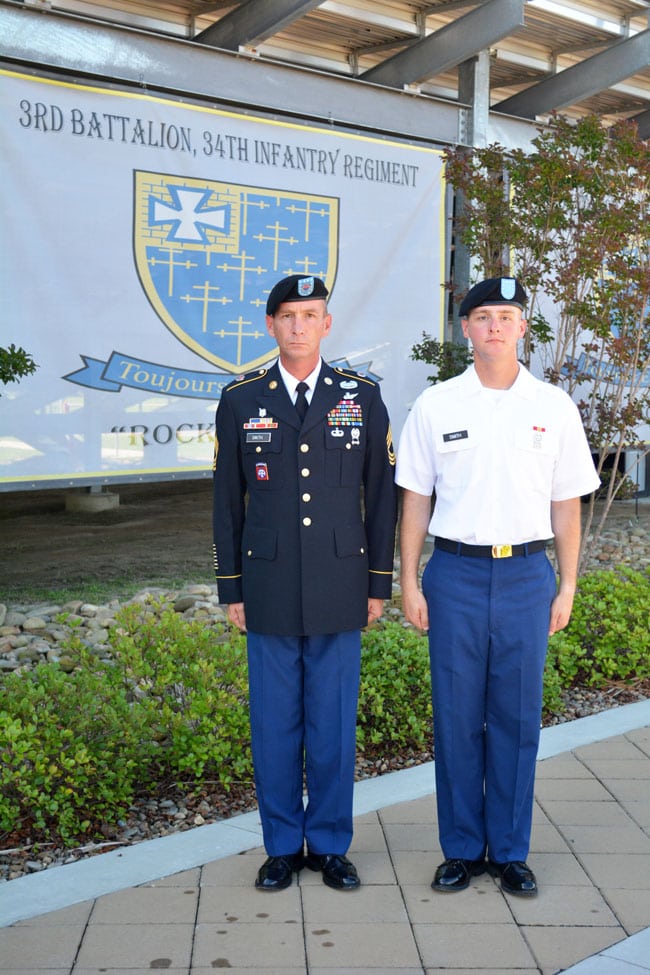 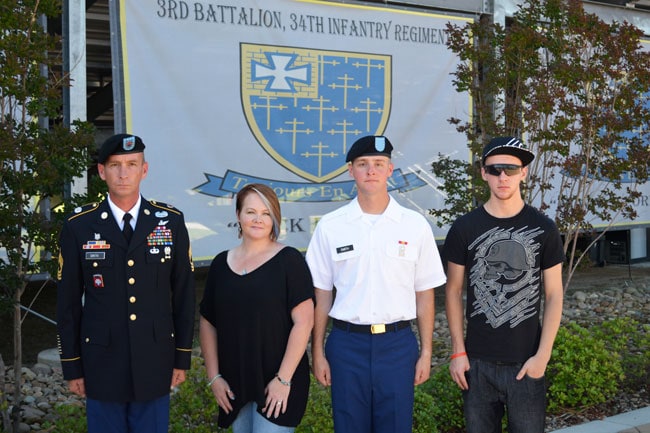 Joshua & his future in-laws. I’m so glad they made the trip! 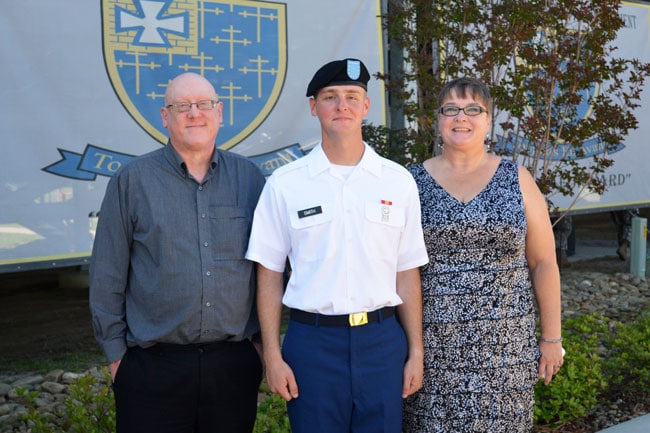 And of course, with his Jacqueline.

After the graduation ceremony we headed back to his company where he got his bags, had a quick formation and then signed out on leave for heading to AIT. AIT is the “Advanced Individual Training” – it is where they go to learn their army job after they have learned soldiering and discipline in Basic Training.

We packed up the camper and turned the truck north towards Fort Bragg, North Carolina. Since Joshua didn’t have to be to AIT until Friday, we spent the night in North Carolina where we were able to have a little family reunion of sorts. You see, we lived at Fort Bragg for 12 years. It is where my children grew up for the most part. We have dear friends that live there who are as close as family. We hadn’t seen them since before we left for Alaska, 5 years ago.

Our first stop after dropping off the camper, was my daughter’s house! We hadn’t seen her since the wedding in October. It was so good seeing her and our beloved dog Griff, who went with her.

After a short visit, we picked up some things to cook out and headed back to the camp ground. Joshua made some calls to family and we got ready for visitors. Several of our dear friends came as well as Jennifer and Ashton. We stayed up until well after midnight, reminiscing and trading hugs. 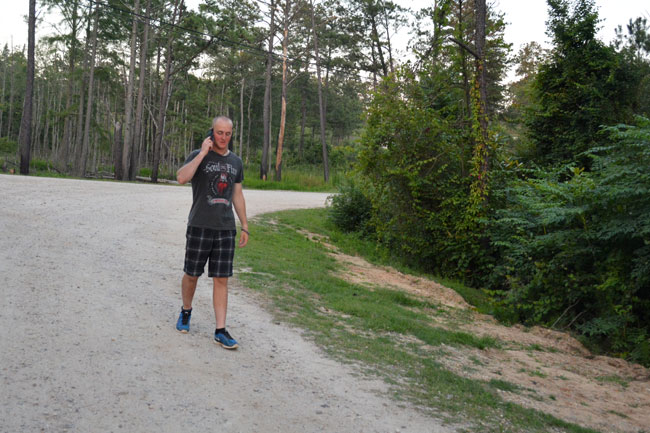 The next morning Jennifer came back by to see us before we headed north again, this time to Fort Eustis, Virginia. 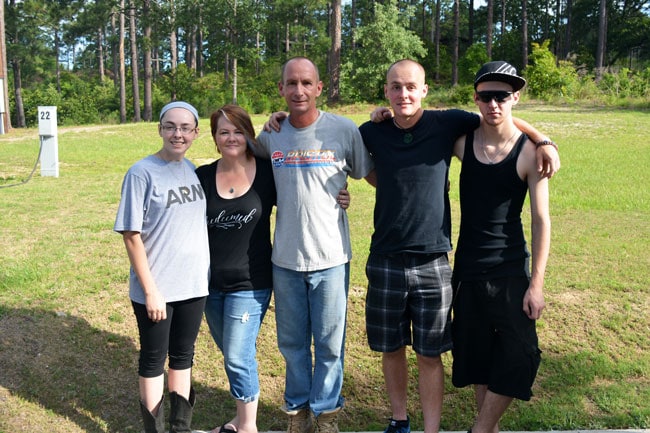 Back in the day, Fort Eustis is where my husband had his own AIT, and it was also our first “permanent party” duty station. We did some sight seeing on post before we had to drop Joshua off again. This time, for a much longer period of time.

We were amazed at how much had changed since we were there, and yet how much was still the same. Joshua is living in a building right next to the one my husband lived in back in 1991 for his own AIT. He will be marching the same streets, eating in the same chow hall and walking a similar path.

It ripped my heart out to leave him again, but at least this time he has his cell phone and we’ll have communication with the little twerp.

We love that kid!

When we arrived back home, I spent some time putting together all of the video clips from the adventure. You can watch them below!