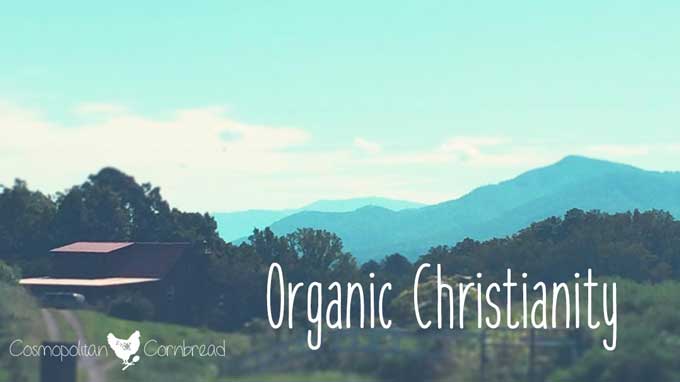 It’s not something that people who read my blog would really know much about unless you have been a subscriber since waaayyy back in the day when I first started. Somewhere along the way I just seemed to start muzzling myself publicly about my views, and I can think of a number of reasons why that might have been….but I also find that regrettable. As of late, I know that there have been some people wondering what sort of Christian I was (am) and well – I thought it was time to go there.

I consider myself an organic Christian. As you read that, you’re probably wondering what in the heck that means. I’ll explain.

Organic Christianity could simply be called another “variation” of Christianity. There are so many! I heard someone make a comment recently though, that the reason there are so many denominations (flavors of Christianity) is that God never wanted us to have a checklist. If He had made it THAT clear, we would have focused in on that list (as we simple humans tend to do) and make that list our god, instead of being focused on having a RELATIONSHIP with HIM. If we never really have all of the answers, then we will have to come to Him to seek them. To seek more of Him, to seek His will, His guidance.

He gives us our daily bread because He wants us to come back to Him every day for more. He doesn’t give us everything we need all at once. That would be too much for us to carry…and we wouldn’t need that relationship with him.

So what do you think of when you hear the word “organic“?

That is what I believe organic Christianity is.

The church as God intended it to be. Without the later additions of man-made doctrines and traditions.

I essentially became a Christian in 1996, while living in Germany. I was saved in a very small fellowship, with no “professional” clergy. It was very family-like, and close. I received an excellent foundation of bible in that setting. And one of my most important lessons:

“If the bible doesn’t say it, it doesn’t matter WHO says it, it isn’t so.”

Upon moving back to the States, I began attending a traditional church, and though I spent many years there, and there were some families that I have the deepest respect and love for, the institutional church setting was just not for me. I have always been one to “question everything.” Some would think this to mean that I have a problem with authority, or that I am some sort of rebel. On the contrary, I have the greatest respect for our true authority, our Lord. I look to His word, and I use it as the litmus test for everything. Like the Bereans, I search the scriptures diligently and compare everything to it. (Acts 17:10) I think there are many readily accepted Christian traditions out there, that while very sincere, are simply man-made traditions.

I look to what the church was in the new testament. In the first century.

What did that body of believers look like? How did they live? What did they do?

I believe that should be our example.

So that is a bit of who I am, and why I refer to myself as an organic Christian. Part of the Ekklesia.

Pure faith, no filler, nothing artificial.