A Tale of Two Mixers

Home » The Front Porch » A Tale of Two Mixers

Just over a year ago, I got a wild hair to replace my Bosch Universal Plus Mixer

with a KitchenAid Professional 600

I spent a great deal of time going back and forth in my mind if this was a switch I wanted to actually go through with. My neighbor “Mrs. Q” had gone and bought her own Pro 600, and I borrowed it to make my bread and see if it did an acceptable job. I thought that it did, so I went ahead and jumped in with both feet.

One night I put my Bosch on eBay with a “Buy it now” price that I thought would be awesome if I could reach. Then I went to bed.

It sold before midnight at the “Buy now” price. Gulp.

So I packed it up and shipped it to its new owner…hoping I hadn’t made a mistake. The Bosch served me well, but I felt I couldn’t justify having two mixers and with our soon-coming move to Alaska, I was worried about even a single extra pound of household goods weight.

Then I went and bought this. 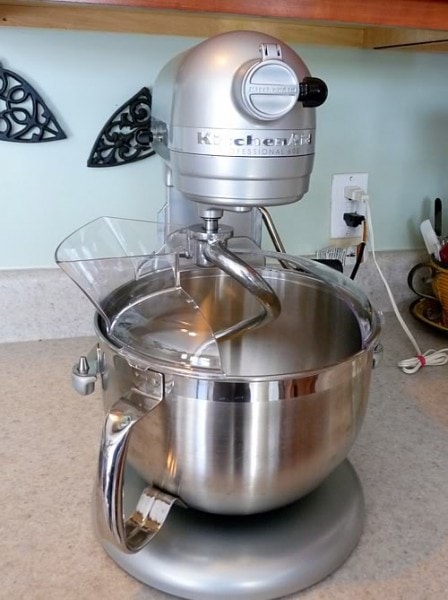 I loved it. It was so shiny and pretty, and looked so good sitting on the counter. Ooooo…Ahhhhhh.

About 6 weeks later, the thing died on me. Well, not died, but when using it to do only a single batch of bread dough, it got so hot it started smelling like it was about to catch on fire, and I shut it off, and had to aired out the house.

Then I called the “Hassle-Free Replacement Warranty” number in the manual. I proceeded to tell the agent what trouble I was having, and that there was something wrong with this mixer, and I wanted a new one.

She blamed the cook.

I’ll spare you the rest of the details, but suffice it to say I was so aggravated with my first customer service experience with KitchenAid, my husband had to walk out of the room. He was afraid I was going to explode and wanted to avoid being hit by shrapnel.

They finally sent me a brand new mixer….and I immediately put it on e-bay.

I was so disappointed, because every time you watch “professional cooks” on Food Network, or about anywhere else, what kind of mixer do you see? Almost always a KitchenAid. How could I have had such a bad experience with such a popular brand with the pros?

Let me tell you a little about the Bosch Mixer. It is a work horse. The motor is so strong, that I can easily do 6 loaves of bread dough at a time and it doesn’t even blink. 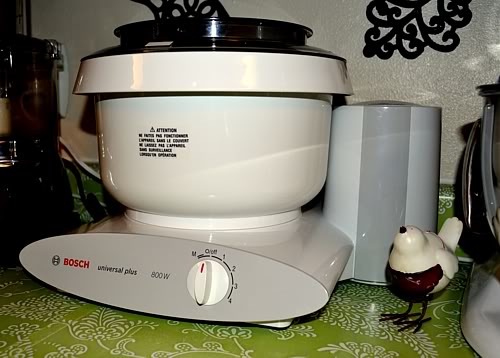 The downside? The motor in it is so strong, that I find I can’t hardly use it to mix things like cake batter, cookie dough or anything like that. It slings the contents to the side of the bowl, even on its lowest setting.

So I went back to using the Bosch for all my breads, and my old hand mixer for everything else. The about a year later my hand mixer died.

I started think about the KitchenAid again. I was certain that I simply had to have had the bad experience of a “lemon” and decided to give them another chance.

But rather than going “all out” and getting their expensive “Pro” series mixer, I decided to go with their more basic KitchenAid Artisan 5-Quart Mixer

. It is smaller and lighter than the “Pro” – and less expensive. I got a good deal too, as the local store had them on sale, plus you got a rebate on top of it.

And so, back to my kitchen came the “KitchenAid.” 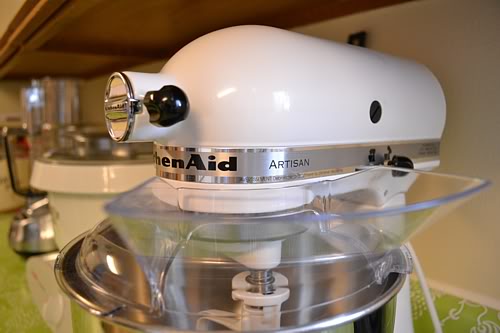 My assessment at this point is, “so far so good.” I have not had any trouble with it, and it has done everything I have asked of it. Kitchen Aid is redeeming its reputation just a bit in my book.

Update (Jan 2014) I have now used my KitchenAid mixer

mixer for 3 years. It is starting to show some wear. The pin in the hinge continually works its way out and I have to tap it back in with a rubber mallet. When it is mixing something with any resistance, the head of the mixer bounces all over the place, and sounds like it’s going to fly away. That said, I am still pleased with it. I used this mixer almost daily, and have even gotten the courage up to do small batches of bread or pizza dough. It handled them just fine. No more repeats of my “smoking mixer” fiasco from 2010. I know people who have had their KitchenAid mixer for 20 or more years. I even know someone who inherited her grandmother’s KitchenAid, and has no idea how old it is.

I do think that I will have to replace it before too long, and am considering going with the KitchenAid Professional 600 6-Quart mixer

Update #2 – after seeing my tweet, and reading this blog post, KitchenAid sent me two videos to help me out. After watching the below video…Eureka!!! My mixer is back to working just like new. I’m thrilled. So no more needing to think about mixers. Phew! Crisis averted.

Here’s the second video they sent me, just in case, but the first one was what I needed:

Secondly, I found out in a comment below, and confirmed by Bosch, again via twitter, that they have an attachment that actually scrapes the bowl to keep your ingredients down where they need to be.

This makes me very happy. I love my mixers and want them in my kitchen for a VERY long time.

This post is simply my opinion and experience with these stand mixers thus far. Your mileage may vary :)

Fresh from the farm - This quick, one-skillet dish

The Friday vlog is up! I’ve had several people a

“For his anger is momentary, but his favor lasts