Why You Should Raise Rabbits on the Homestead (or in Your Backyard!)

Home » Homesteading » Rabbits » Why You Should Raise Rabbits on the Homestead (or in Your Backyard!)

Why rabbits make a great addition to the homestead, and why you might want to raise them, too.

I have found that more and more, people are beginning to see the benefits of raising rabbits. These aren’t just something that can benefit a homestead, but also most households.

First and foremost, rabbits provide lean and healthy meat. Rabbit meat isn’t available in most grocery stores, so raising them yourself is the only way you can realistically have rabbit meat in your home.

Rabbit meat is a lean, white meat that is very similar to chicken. It is so similar to chicken, that most people can’t even tell the difference between rabbit and chicken in a dish. As a matter of fact, I have a friend who calls it “hoppin’ chicken.” You can use rabbit meat in just about any recipe that you would make chicken.

Rabbits take much less space to raise than most other livestock. Even in my case where we use rabbit tractors, it doesn’t require much more than a typical suburban backyard. If you keep rabbits in hutches, it takes even less space.

Rabbits breed like, well, rabbits. Rabbits can be bred anywhere between 3-6 times a year, providing 6-8 kits per litter on average. (A kit is a baby rabbit.) The amount of feed you’ll provide to a rabbit is way less than any other livestock you will raise. If you pasture your rabbits, like I do in rabbit tractors, then that cost is reduced even more. My rabbits require very little food. Most days there is feed left over in the feeder, and the hay I give them isn’t even touched. My rabbits have grasses, clover and other natural plants that they can enjoy every day.

At only 12-15 weeks, a young rabbit will already weigh about 4 pounds and be ready for butchering.  Rabbits are very easy to butcher, and it only takes minutes to go from dispatch to the freezer. No scalding or plucking needed like you would for chickens.

Gold For Your Garden

Seriously, rabbit manure is amazing fertilizer. Rabbit manure is the only manure that can go straight from the rabbit home to your garden without harming it. You can also make a manure “tea” to water your plants with, that is a natural “miracle” without the chemicals.

When we lived in North Carolina, we had a pet rabbit. I would sprinkle Cabbage’s manure all over the yard as well as in the garden. People were constantly asking me what I did to make the grass so green. It was so green, it almost looked blue, and you could tell exactly where my yard ended and the next neighbor’s yard started. Rabbit manure was my secret.

People love it so much, they will beg rabbit owners for it, and even buy it!

These are just a few reasons that I have given you to think about raising rabbits on your homestead. If you take the leap, I’m sure you’ll come up with even more! 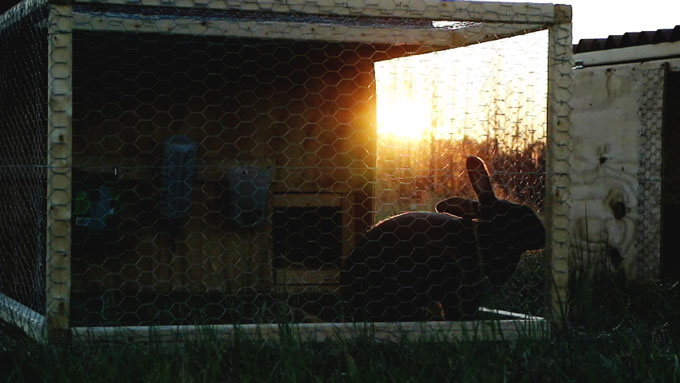 5 thoughts on “Why You Should Raise Rabbits on the Homestead (or in Your Backyard!)”