The UAF Museum in Fairbanks, Alaska

A few weeks ago, we went on a little trip to the local University of Alaska – Fairbanks, and visited their museum. 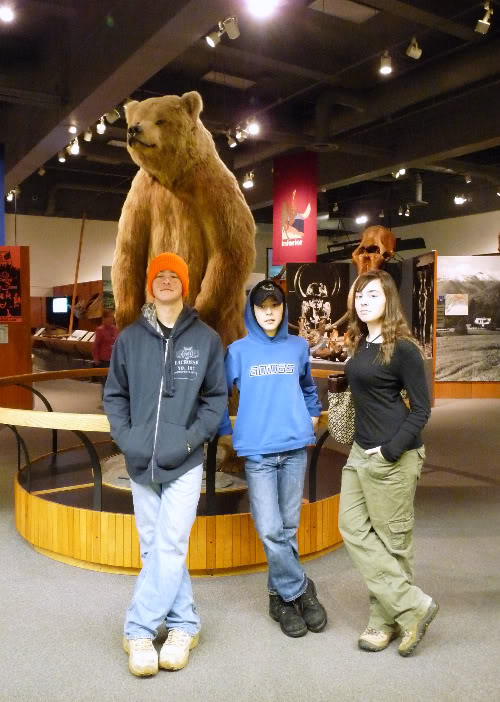 The museum wasn’t huge, but there were lots of things to look at. 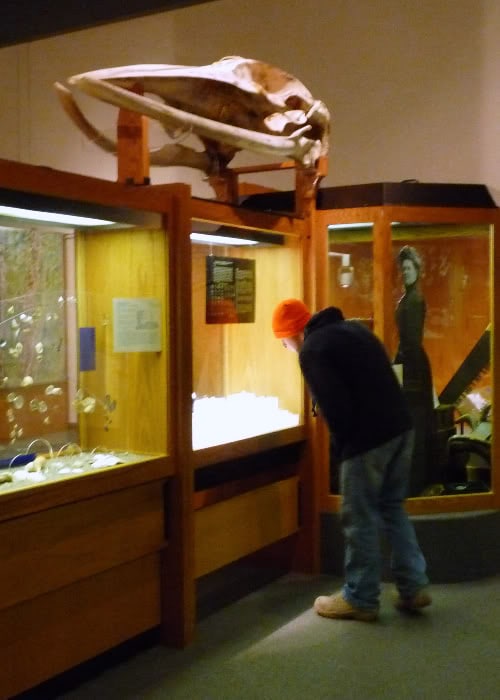 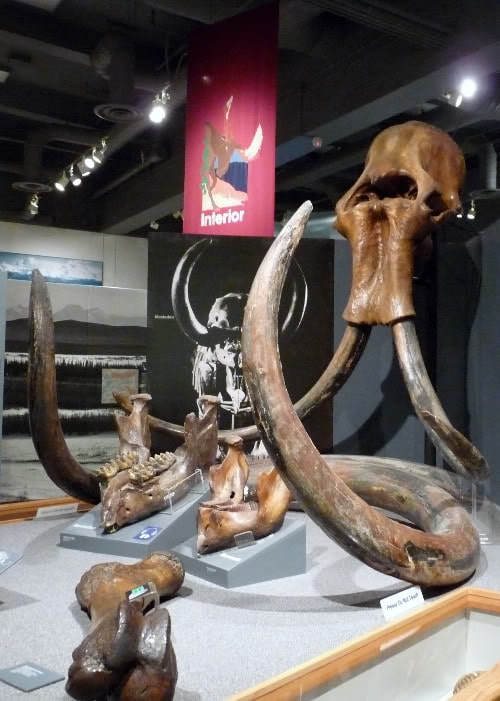 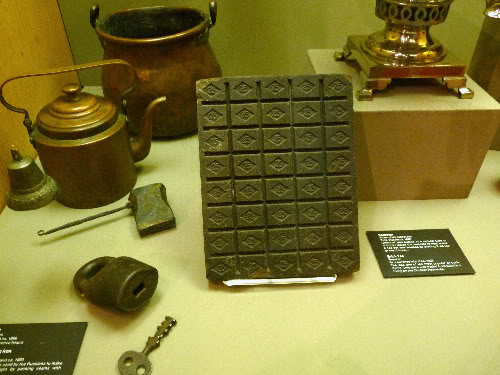 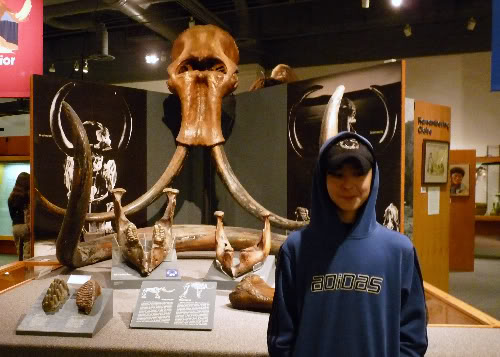 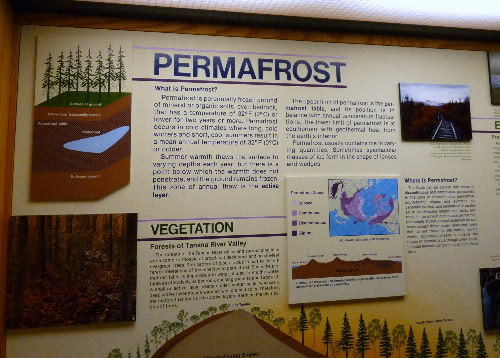 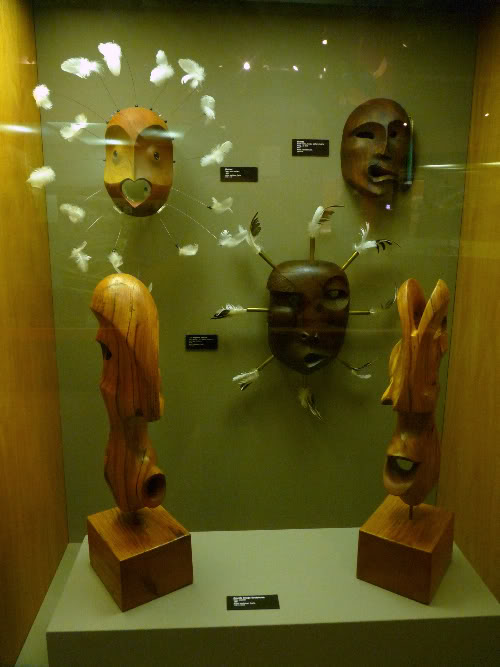 Of course it wouldn’t be an Alaskan museum without a display about GOLD. 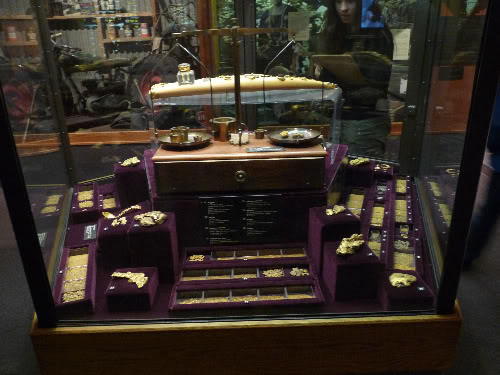 How about a High School Diploma from 1917? 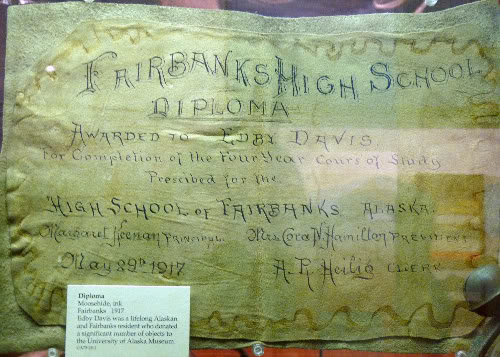 How about this furniture made of antlers and horns? 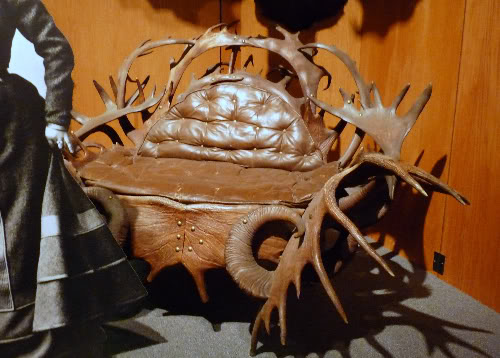 There were some very sad displays as well. This was WWII era articles and letters….when Japanese people were gathered up and shipped off to “camps” here in the United States. 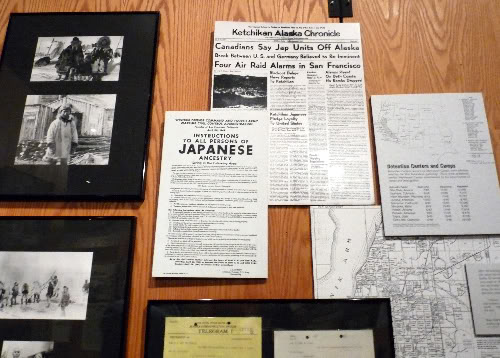 The locations of the camps. 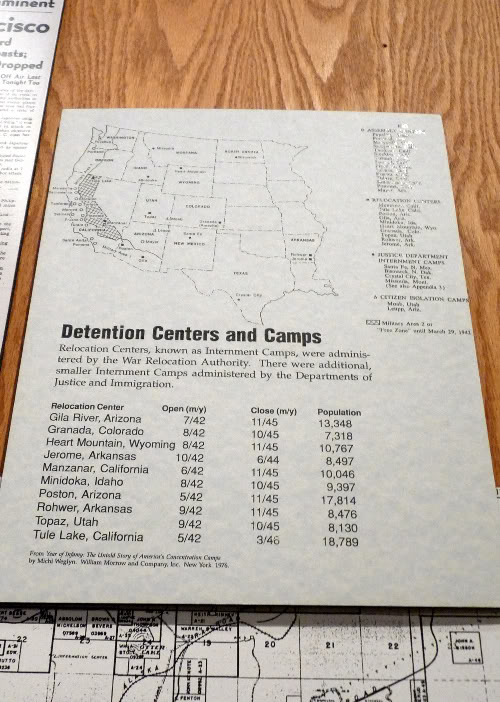 “But this is America, it would never happen here.”

One of the actual telegrams. 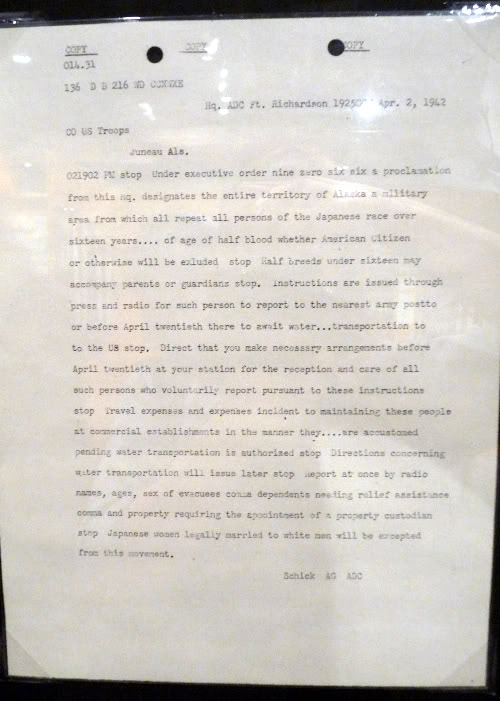 “Under executive order nine zero six six a proclamation from this Hq. designates the entire territory of Alaska a military area from which all repeat all persons of Japanese race over sixteen years…. of age of half blood whether American citizen or otherwise will be excluded stop half breeds under sixteen may accompany parents or guardians stop. Instructions are issued through press and radio for such person to report to the army post to or before April twentieth there to await water….transportation to the US stop. Direct that you make necessary arrangements before April twentieth at your station for the reception and care for all such persons who voluntarily report pursuant to these instructions stop Travel expenses and expenses incident to maintaining these people at commercial establishments in the manner they…. are accustomed pending water transportation is authorized stop Directions concerning water transportation will issue later stop Report at once by radio names, ages, sex of evacuees comma dependents needing relief assistance comma and property requiring the appointment of a property custodian stop Japanese women married to white men will be excepted from this movement.”
More Historical & Cultural displays 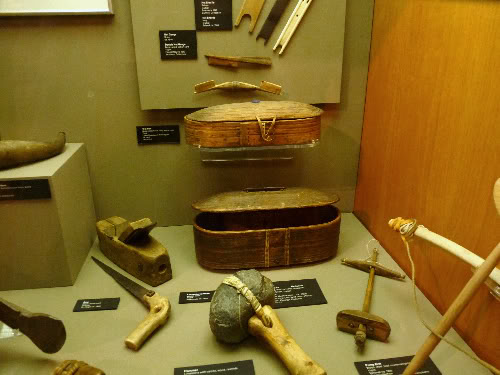 Goggles for protecting the eyes of hunters on the ice. 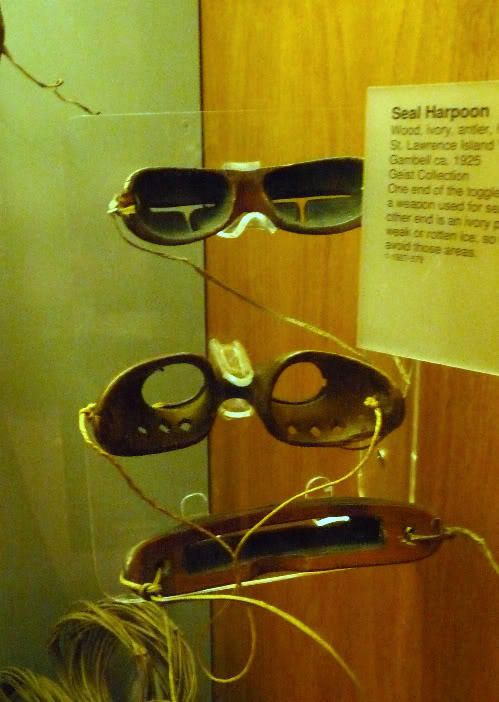 Remember the Ulu knives I told you about? 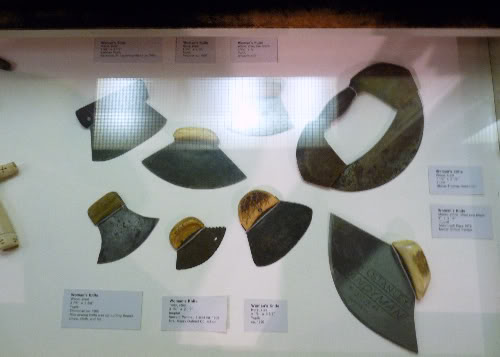 This is one giant chunk of copper. 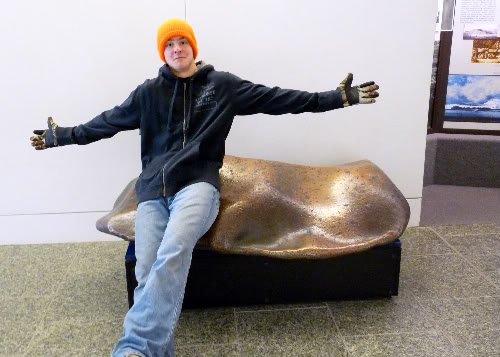 There were also displays of art. I loved this painting. 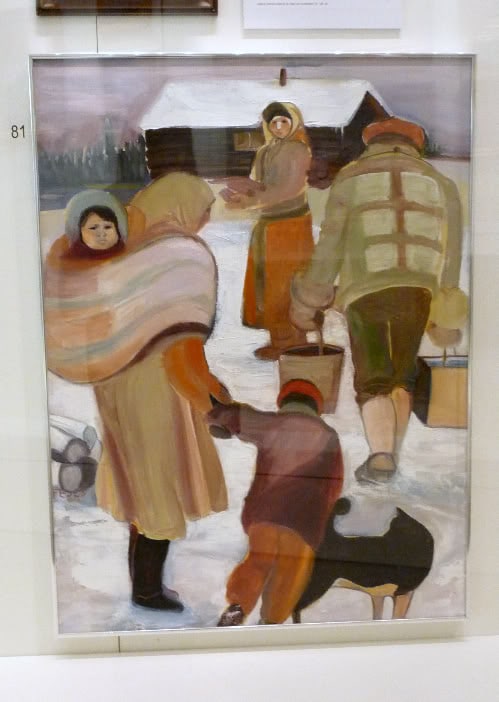 A basket made out of fish skins. 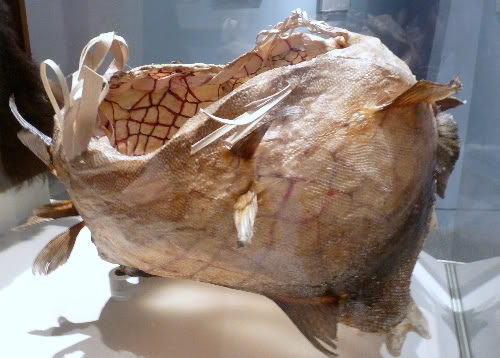 I loved this polar bear sculpture too. 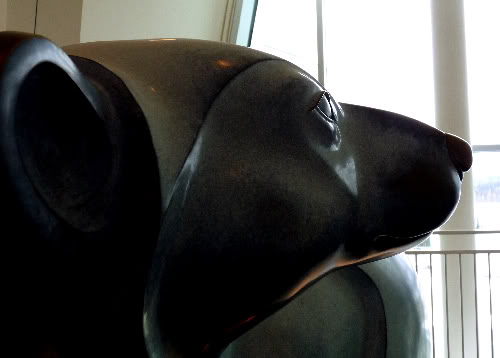 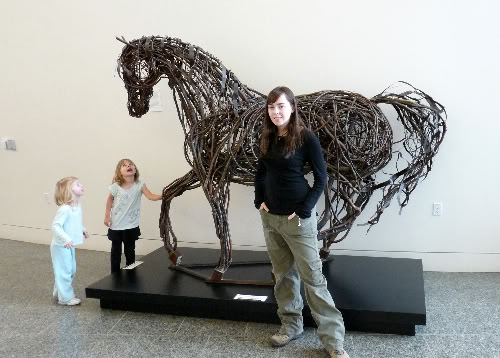 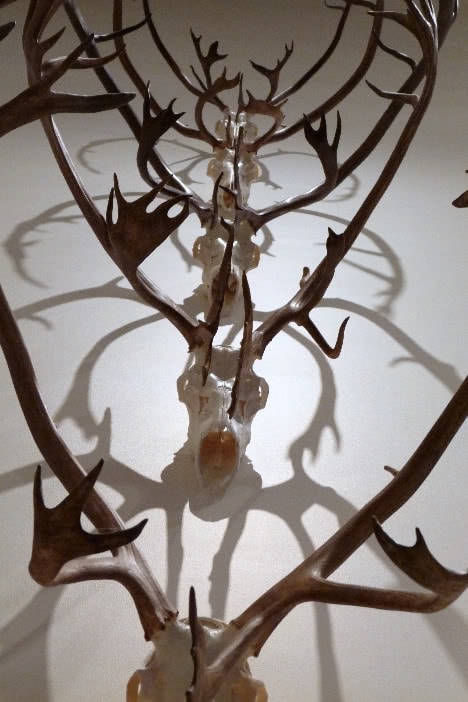 Check out this art. Any guesses what it is? 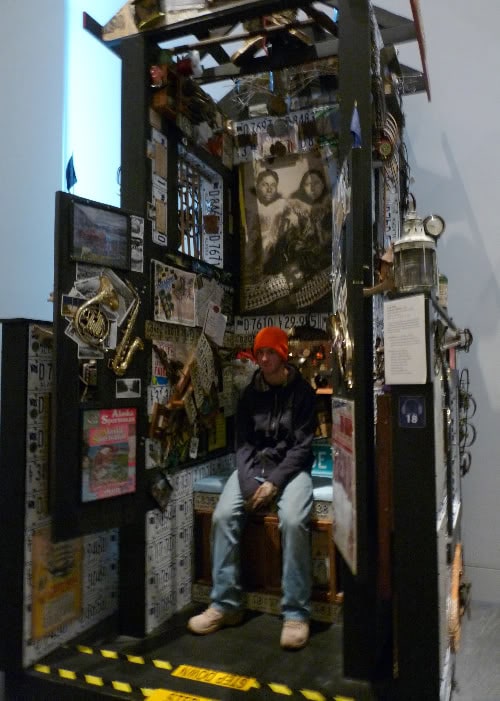 It is an OUTHOUSE!

And as we left, we were greeted by some snow. This was only the second snow we had seen since arriving here in Alaska. Winter came late! 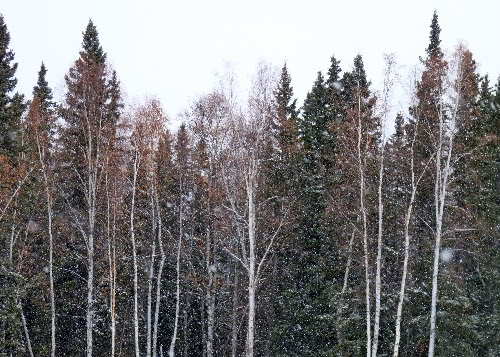 We had a nice time on our first field trip of the year.