You may have noticed, that we have a new family member. I would like to officially introduce you to him. 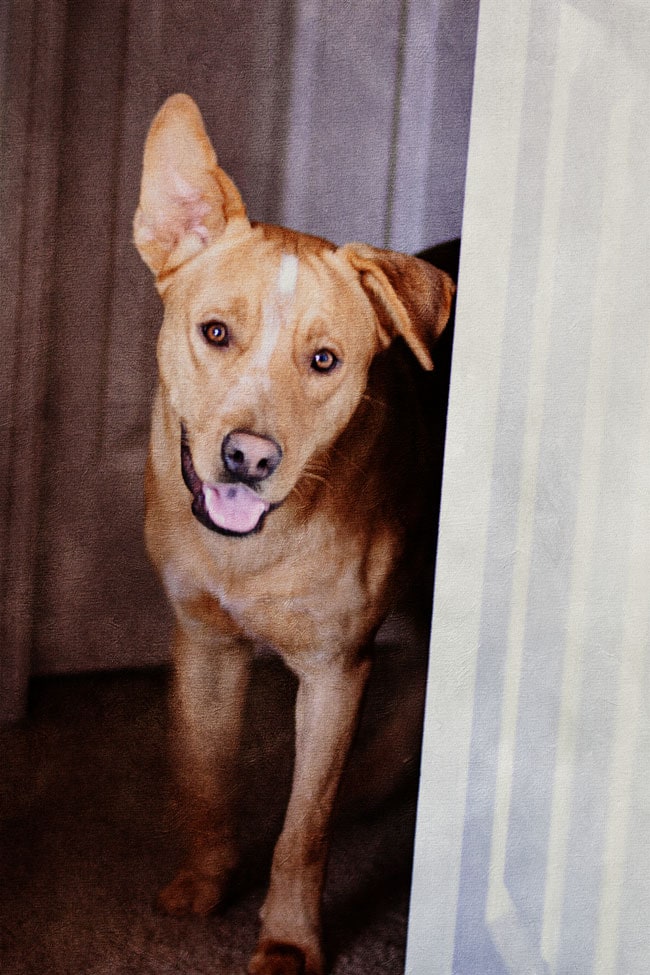 We had been thinking for some time about getting a second dog. Ever since Griff moved to North Carolina when my daughter got married. We really felt that it would be nice for Chena to have a companion that she could play with.

I would find myself perusing the animal adoption websites for the many shelters & rescue organizations around the area. Then on November 30th, there was a free adoption day at a local shelter. All of the adult pets were free for adoption. We checked out the website, and Jeff had fallen in love with a dog that looked like a young chocolate lab mix. In the photo, the dog reminded him of his beloved Birdie who passed away in 2009 while he was deployed to Afghanistan.

Jack and I headed to the shelter, but when we got there and saw the dog in person, we just didn’t feel a connection to her. But we decided to not just give up, we walked all of the rows of the shelter, looking at all those imploring eyes. Have you ever walked through an animal shelter that is not a “no-kill” shelter? It will rip your ever loving heart out. You just want to take every one of them home! I looked up the statistics of this particular shelter, and only half of the animals that are brought in, get homes.

Just typing that, chokes me up.

We walked through the sea of puppy dogs, wagging tails and bouncing feet. All looking at us as they happily hoped that we were going to take them home.

Then as we came down the last row, there was this sweet dog just quietly laying on the floor, his head on his paws as he watched person after person walk by. He looked as though he had seen so many people walk by, that he had given up hope of anyone coming for him. We stopped, crouched down and called to him. There was just something about those eyes.

He lifted his head, got up and walked over, hesitant at first. Like he was wondering, “Do they really mean me?”

Then the tail started wagging and he leaned his head against the fence so we could scratch his ears.

Can you see that glimmer of hope in his eyes? 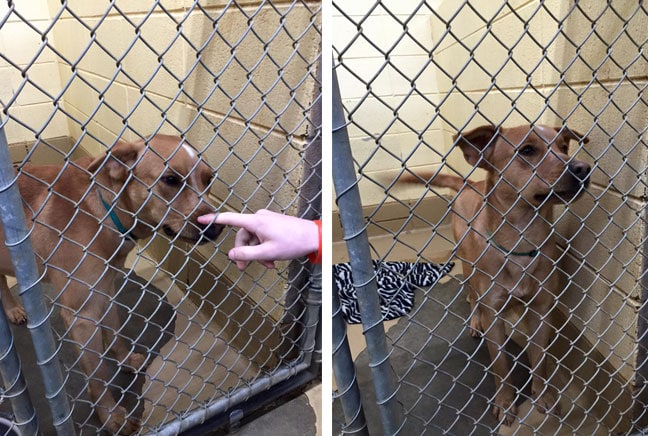 The paper on his pen had him listed as a bulldog mix. He had been brought in as a stray and they had guessed that he was about 3 years old. The pound had called him “Ace.” At least that is what the paper said. You know that is just done to make the dogs seem more amiable – personal. We asked a worker if we could spend some time with him in the meet & greet room, and he had us head in there while he got the pup on a leash for us.

Jack and I sat on the two chairs in the room and waited.

Then the door opened, and without hesitation, “Ace” walked straight in, climbed on my lap and laid his head against my stomach.

I was done. With tears in my eyes, I knew he was our new family member.

Just look at Jack’s happy face. Before we had even signed the papers, Jack had named him Duke. Duke was a strong, manly name for a strong, manly dog. It make me think of John Wayne. So on paper, his name is “The Duke Wayne.” We’re silly like that. 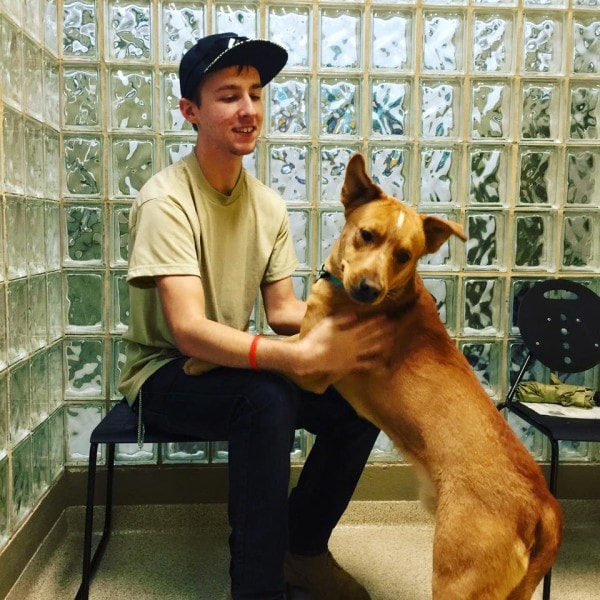 I’m not going to say that everything was a fairy tale, that wouldn’t be realistic. The first day that we brought Duke home, I went to bed that night, and sincerely thought that we had adopted a deaf dog. Most dogs will respond to you when you whistle or click your tongue. Duke didn’t. At all. He didn’t respond to any sound or motion that we made. At that point, I wasn’t regretting getting him, but I knew it would be a major challenge to train a deaf dog.

But the second day, we saw good signs. He finally started looking when you made tongue clicking sounds. It was as though he had never experienced a human speaking to him before. Like he didn’t know that people actually talked to dogs.

I now had a theory about Duke. I think he had just been a “back yard dog.” You know, the ones that people just put in the yard, toss some food out for each day, and don’t ever interact with.

The next day he went to the vet to get fixed. We dropped him off early in the morning and picked him up later that day. When they brought him into the room, the veterinarian told us that he was a super sweet dog, everyone loved him, but that he had had “not much people time.” Confirming my same thoughts.

Later that week, we took Duke on his first outing to a local pet shop. He did great! They took this picture of him and shared it on their facebook page. 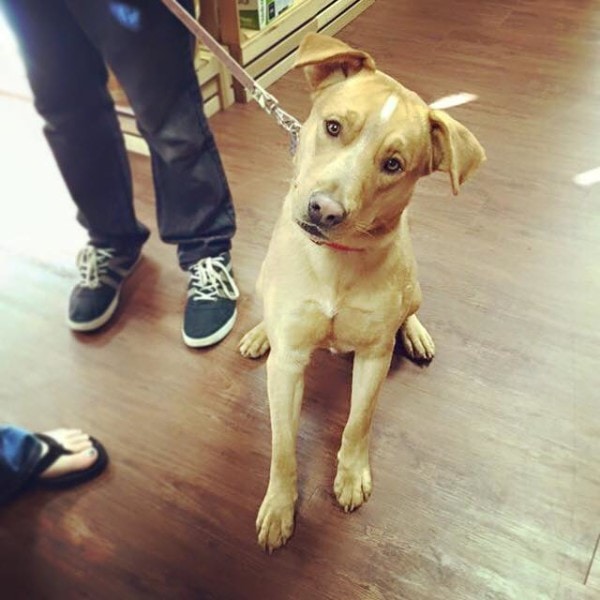 Of course, Chena and Duke are the best of friends. You can’t hardly separate them! 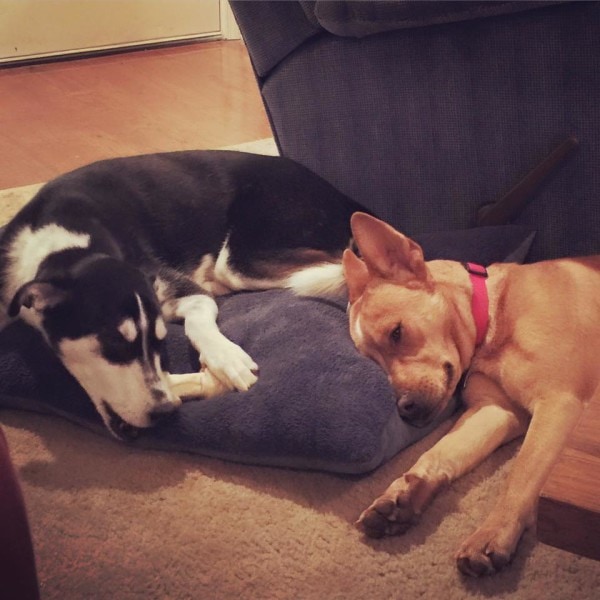 Seeing as Duke was in a new environment, with new people and everything was challenging enough, learning to be part of the household – all these rules and such – we put a “baby gate” up in the kitchen. Doggies aren’t allowed in the kitchen. We figured, one challenge at a time.

But after about 3 weeks, I decided to start working on it. The gate came down while I worked in the kitchen one afternoon. I had to chase him out just a couple times. But by the end of the day, look what happened at dinner time.

Don’t you just love how they are laying exactly the same way? 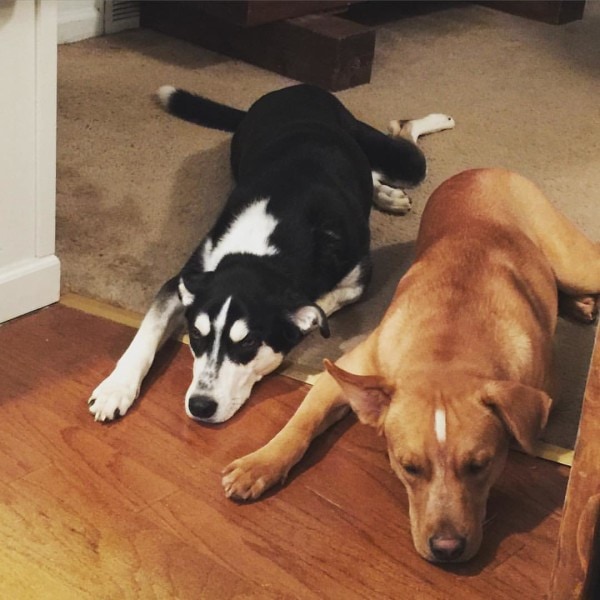 Something else that Duke seemed to have missed out on, was having real dog toys. We think that for two reasons. First, the challenge that we are having with him, is that he isn’t quite sure what he can and most assuredly can’t chew on. RIP dear TV remote. It is just like having a toddler in the house. We have to look for things that could go in the mouth, and put them out of reach. That’s really one of the last things that we’re left working on with him.

Of course, being that he is a pound puppy, we really have no idea what he is. I have ordered a doggy DNA test and in the next couple weeks will send it off for analysis. We are very curious as to what makes Duke…Duke.

Normally only one of his ears stands up, but if you call his name when he has been sleeping, when he lifts his head, they are both on alert. It’s like that left ear can only defy gravity for so long. You don’t really realize how big his ears are until they are both standing at attention! He looks like BatDog when that happens.

So that is him, our newest family member. 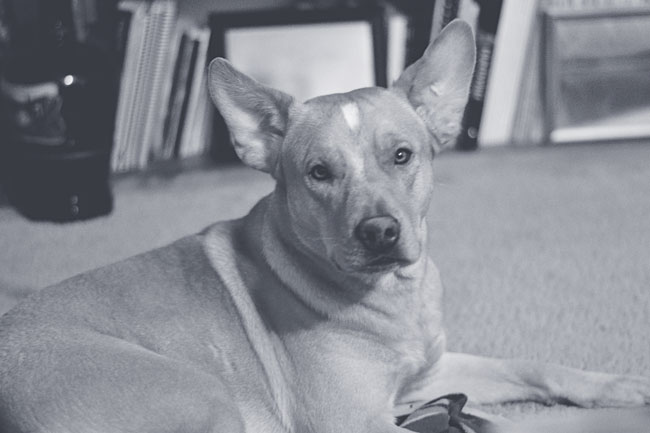