Just a gentle reminder…harvesting an animal is not pretty business. If you are weak-stomached, or don’t know where meat comes from, this is your final warning to skip this post.
~ end public service announcement ~ 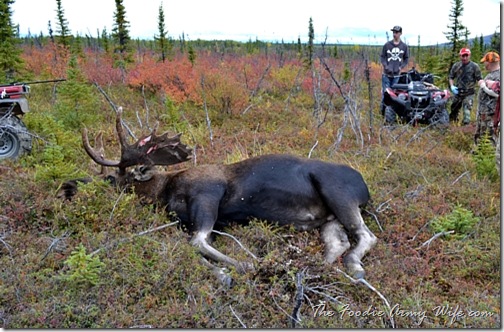 After the adrenaline rush of the successful hunt, when you are exhausted from having arisen at 3am to drive a hundred miles and search for an animal..by truck…by 4 wheeler…and by foot. After the excitement wears off…the real work begins. 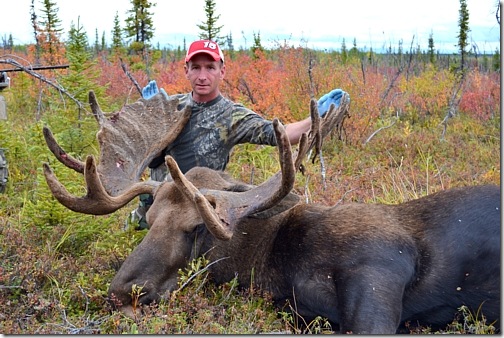 The first thing that needed to be done, was to make this monstrously large animal a little lighter. So they “gutted” the moose, removing all of the internal organs, so that he would be slightly less heavy, and to keep the “ick” away from the meat. 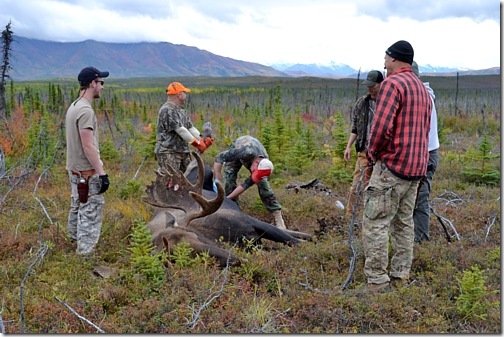 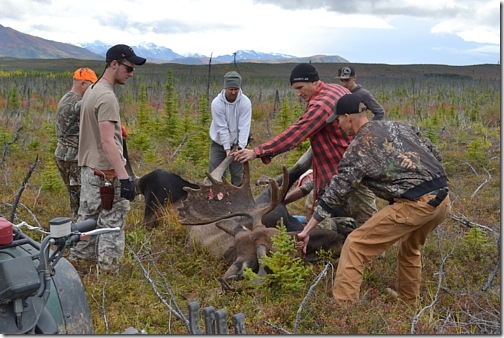 You know how hard it is, when you see grown men simply trying to hold the legs, leaning with their whole body weight. 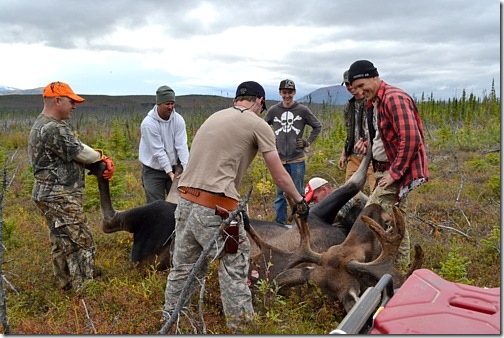 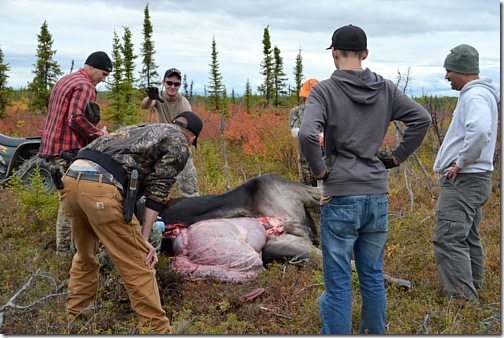 Thankfully if you get a good shot, most of the internal organs are encased in a sort of “sack” and the job, while difficult, isn’t too terribly messy. But it still takes a great deal of effort and time to carefully disconnect and remove it from the body cavity. 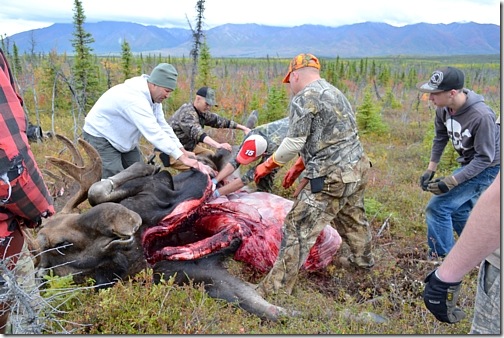 When my husband shot the moose, we had just walked about 500 yards to a small rise, where we could look down into a narrow valley, and sit and keep watch. We had no sooner gotten to the location, when my eldest, Joshua turned towards me, and went “WOAH!!!” and pointed. The huge animal had been bedded down off to our right, and was circling around behind us. The fact that he was only 250 feet or so from our trucks was unbelievably fortunate.
Next, they removed the head. Trying to move this massive animal around with these huge antlers in the way was nearly impossible. We are not going to do a “head mount” so there was no need to skin it out and keep the neck & shoulder skin attached.

My boys carried the head up to the truck. 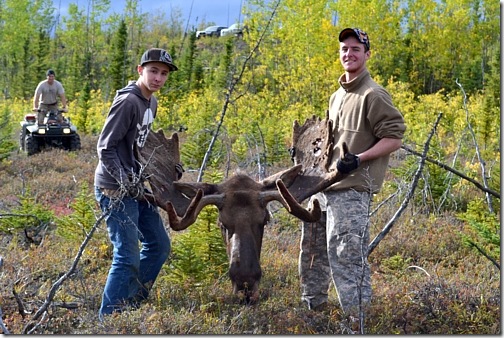 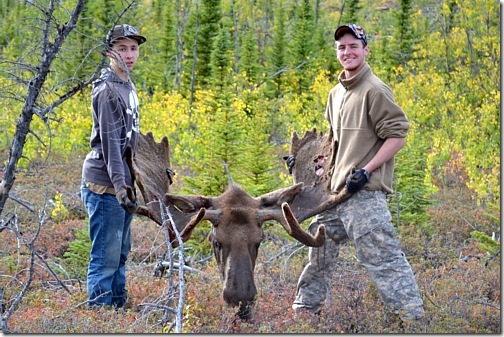 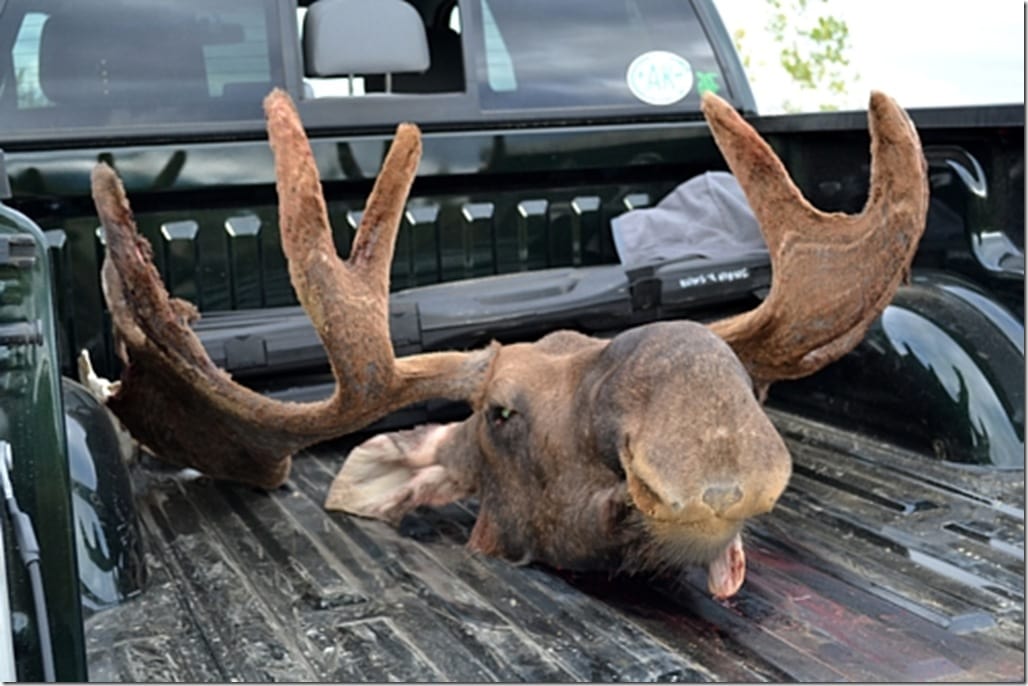 I didn’t photograph the next part, because I was behind the wheel of my truck. One of our neighbors was in the area hunting as well, and came over to help us out. He is a former logger, and has priceless experience…and equipment…for hauling heavy objects! So we used a system of rope, pulley, and truck hitches to slowly pull the moose all the way up to the vehicles. If our neighbor hadn’t been there, we would have had to physically carry each and every part all the way up the hill, through the thick & spongy tundra surface and downed trees. It would have taken forever! Unlike a whitetail deer, you can’t just heave a whole moose into the bed of a truck and take it home with you. One moose hind quarter alone weighs about 200 lbs.

But once the moose was up the hill, the next part began. 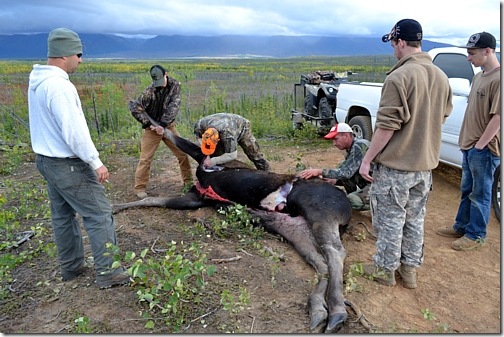 They cut off each “quarter” and every bit of meat they could. 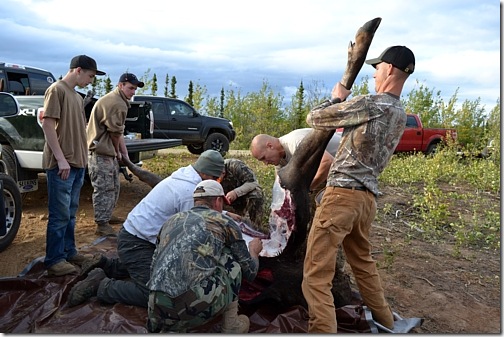 Loaded them all in the back of my truck. 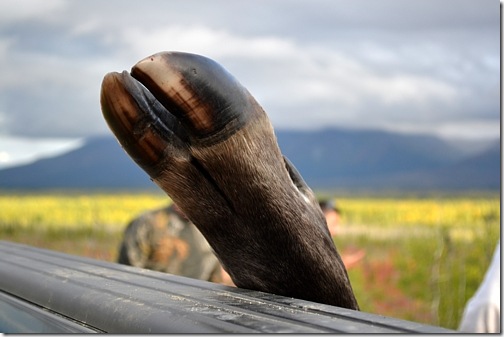 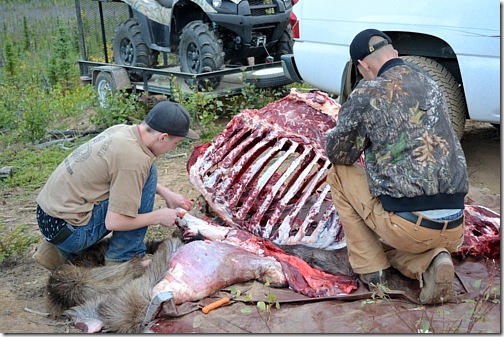 Finally, 6 hours after the moose was downed, we were at last done. Sort of. And when I say “we” I really mean “they.” With all of the men around, I would have been in the way…so I took on the hard work of taking pictures.

We still had a hundred mile drive home, and then hundreds of pounds of meat to finish harvesting and get in the freezer. And believe me, I was…and am…involved in that part. The next morning, it was like a block party in our driveway. Neighbors were out taking pictures with their phones, posting on facebook. Random people driving down the road stopping and taking pictures… it was very funny. I also held several impromptu science classes with the neighbor kids about moose anatomy, behavior…danger…etc. 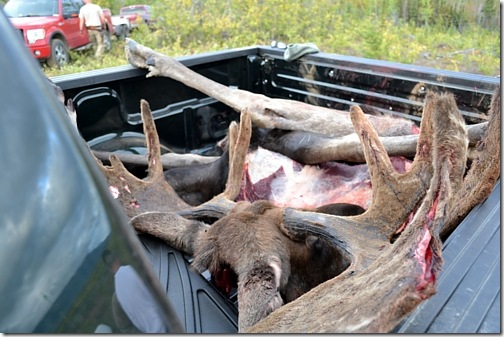 Now to get this to the butcher!

3 thoughts on “Harvesting a Moose”