I’m Not an Easter Present 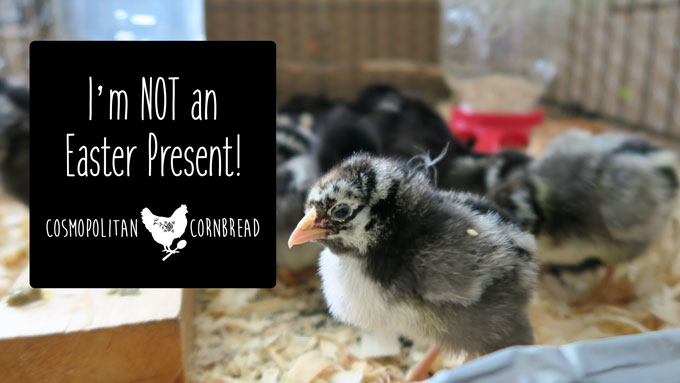 But what really happened?

They brought home this baby chick, thinking all it needed was some food and water. They think just because it is a cute bundle of energy, that it would entertain their cute bundles of energy.

But here’s what they need to know:

Chicks Are Not Toys

A baby chick is a living thing. It is not a toy. You can’t do whatever you want with it and expect it to survive. That should be obvious, don’t you think?

A baby chick’s bones are absolutely tiny, and take little pressure to break. If chicks pile up on one another, that is all it takes to crush a chick to death, let alone allowing a toddler’s hands to squeeze the wiggly little baby. Even if the chick doesn’t die immediately, it probably has internal injuries and will die a slow, painful death.

A baby chick is designed to live under the wings of its protective mother. That mother’s body puts off heat like a radiator. She might even pull off some of her own feathers to give better heat to her young. When a chick is brought home from the store, you must, MUST have a heating lamp or other electric brooder to provide the heat that chick needs to survive. It can’t make its own heat. You have to take the place of that mother hen and provide it for her. But be careful with heating lamps. If not done properly, they can catch fire and not only kill the chick(s), but burn your house down and worse.

Let’s face it, you have never smelled “stink” until you have smelled a brooder full of wet bedding & chicken poop. Baby chicks will scratch and sling food, bedding and water all over the place, and they poop a lot. That bedding has to be changed every other day or every day, and even then your house will stink. Then let’s talk about the dust. Oh my heavens the dust! When I raised my flock of babies last year, I had to take down the curtains, strip the bed and clean every square centimeter of the room, including the ceiling.

I saw in a Facebook group not too long ago where a woman’s co-worker was planning to get her kids chicks for Easter, and was going to let them keep them in their rooms. As if all of the above information wasn’t reason enough to convince someone of the err of this route, there’s this. Chicks are not chicks for long. They grow so flipping fast it would make your head spin.

You can not just stick a chicken in a dog crate (as she planned) and think it is going to survive. I mean, you could survive in a coffin for a while, but eventually you are going to give up the ghost. Would you expect any less from a creature that needs sunlight, exercise  and fresh air to survive? Chickens are omnivores. Are you going to go outside and gather insects, plants, lizards and other things for your chicken to be healthy? Or are you planning on feeding them straight feed the rest of their lives?

Would you get a dog and force it to spend its entire life in a closet?

What kind of life is solitary confinement on bread & water?

That’s the life those chickens would have. Considering a chicken (if healthy and happy) lives up to 15 years – is that an investment you are willing to make?

I’m sure I could go on with more reasons on why a chick is not a present, but I think this has made the point.

If you really want chicks to be part of your child’s experience, educate yourself first, or take your kids to visit a farm. Let them get a good experience. Not the experience of their cute little chick dying after 3 days. I mean, they don’t handle goldfish dying very well.

If you insist on getting your kids chicks for Easter presents….here’s a breed I would highly recommend:

1 thought on “I’m Not an Easter Present”