Home » The Front Porch » It Is Well

Thoughts from the front porch swing. 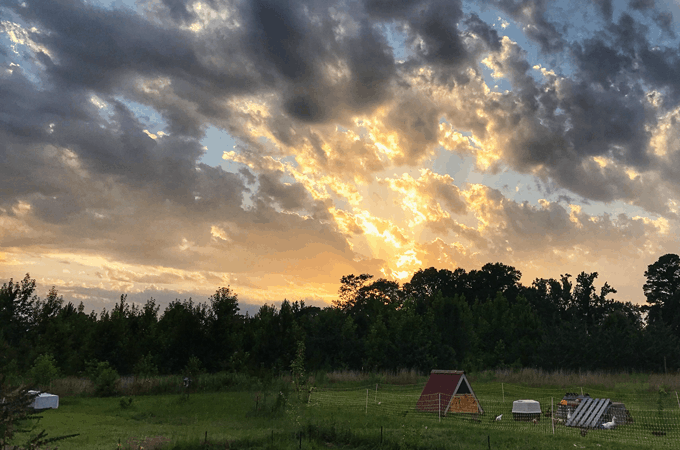 Tonight I’m sitting on my front porch, waiting for the chickens to go inside so I can close up the coops for the night and put the homestead to bed.

I’m watching the goslings play in the water, periodically looking at me and chattering away.

Stumper is sitting outside the living room window, intentionally tormenting the dogs because they can’t get to her and she knows it.

I’m listening to the “whirr” of hummingbirds swooping past, and the growing calls of the tree frogs and other evening sounds.

I’m enjoying the relatively cooler, yet “dog mouth damp” evening summer air. The kind that makes your clothes stick to you like contact paper sticks to itself.

As I sit here, I’m enjoying the beautiful and serene sunset and thinking about all that had transpired lately.

For those of you who may not watch the episodes, or if you have missed it, back in May I had an accident. Here’s the rundown of what happened.

While out in the morning doing chores one day something awful occured. It was right after “Alberto” came through and dumped tons of rain on us. The poultry yard was a huge, muddy mess. As I was spraying out the water pans, the water hose caught the edge of a dish and shot nasty water in my face. As I was talking to the ducks…and my mouth was open. I was instantly filled with a sense of dread and my immediate thought was, “Oh no!!!”

Not long after I started getting sick. At first the thought was salmonella. Then the thought switched to e. Coli. But then as my symptoms grew worse and worse, those were ruled out and it turned out to be giardia. (Confirmed by lab work.) I won’t go into all the horrid details of the illness, but suffice it to say, it was awful.

It is still awful.

It has been a very discouraging situation that caused a chain reaction of disappointments.

The illness had such a devastating effect on my body that I am still not 100% back to myself. I’m now lactose intolerant – and praying that is not permanent. For a long time any food I ate – every food I ate – caused me terrible pain.

You may have noticed that I haven’t really been posting new recipes on the website. It is hard to develop recipes to publish when you are afraid to eat just about anything. I’m still reaping the effects of it, as I will mention in Monday’s episode.

This all took place just after we got the garden in. Because of that, the garden wasn’t properly mulched and the whole garden has struggled with the weeds. And rabbits. I haven’t had the energy to get out there and do all the things I needed to do.

But despite all of this, or maybe because of all this, there has been a song that has frequently come to mind.

It is Well with my Soul.

If you have never heard the story behind this classic song, it is something else.

This hymn was written after traumatic events in Spafford’s life. The first was the death of his son at the age of two and the Great Chicago Fire of 1871, which ruined him financially (he had been a successful lawyer and had invested significantly in property in the area of Chicago that was extensively damaged by the great fire). His business interests were further hit by the economic downturn of 1873, at which time he had planned to travel to Europe with his family on the SS Ville du Havre. In a late change of plan, he sent the family ahead while he was delayed on business concerning zoning problems following the Great Chicago Fire. While crossing the Atlantic Ocean, the ship sank rapidly after a collision with a sea vessel, the Loch Earn, and all four of Spafford’s daughters died. His wife Anna survived and sent him the now famous telegram, “Saved alone …”. Shortly afterwards, as Spafford traveled to meet his grieving wife, he was inspired to write these words as his ship passed near where his daughters had died. Bliss called his tune Ville du Havre, from the name of the stricken vessel.

You can read the rest of it here.

So with everything that has been happening, my mantra has become, “It is well with my soul.”

Will I ever have more than one day in a row that I am not in pain? Is this going to be my new normal?

Now that we have finally settled down and starting our homestead dream, will I have the ability to actually live it?

This year’s garden may be a near wash, but God willing, there is next year. There’s even this fall when we can plant a winter garden. I am grateful that we are in a situation that we weren’t relying upon our garden to survive.

Yes, this has been a rough couple of months, but I can’t allow it to discourage me. I have to trust in God and draw my strength from Him.

I will lift up my eyes to the mountains; From where shall my help come?
My help comes from the LORD, Who made heaven and earth.