How to Keep Your Chicken Coop from Stinking

Home » Videos » How to Keep Your Chicken Coop from Stinking

I’ve had some people wondering about how I keep my chicken coop from being stinky. There’s three keys to make it happen.

As I discussed in the vlog below, there are a few things you can do to keep you chicken coop from stinking.

First, the most obvious thing is to clean out your coop on a regular basis. There are many different views on bedding, deep bedding, etc. I personally choose to use a good layer of straw or wood shavings on the floor of my coop. After I remove all of the old bedding to go to the compost pile, I sprinkle down a good layer of DE (diatomaceous earth) to prevent mites and other pests from living in there. Then I replace it with clean, dry bedding. How often this gets changed really is determined by the weather. If we have a ton of rain, mud may get tracked in resulting in my changing this sooner. Generally I do this ever other week.

On the windows of my chicken coop, I have shutters that I built. The windows are placed on opposite sides of the coop so that I can have air flow. Air being able to move through the coop also helps keep the coop dry. Every morning I open the shutters just before opening the chicken coop door. If we are expecting storms though, I leave them shut to keep any rain from blowing in.

A couple times a year, I will do a deep clean of the coop. Instead of just the usual cleaning, I’ll scrub down the roosts, ladders, walls, etc. and get it extra clean. When I built my coop, I gave it a linoleum floor for easier cleaning as well.

Additionally, there is a product called “Sweet PDZ” that I get from the local farm supply store. They sell it in the poultry section, but if you get it from the equine area you can get a better deal on it. This is a natural mineral that helps with moisture and thus, helps keep odor down. I started sprinkling some of this down along with the DE when I clean the coop. When we have a lot of rain, and mud develops outside, I’ll sprinkle it in the muddy areas as well. There’s nothing smellier than chicken-poop-mud!

This is what works for me, and has prompted more than one comment on how my coop is nice and stink-free. 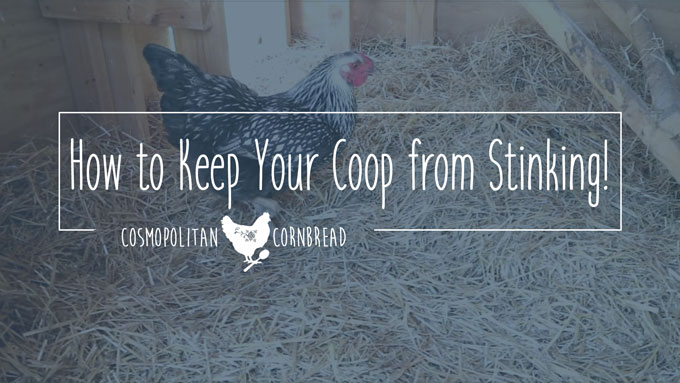 2 thoughts on “How to Keep Your Chicken Coop from Stinking”