The next segment of our trip, we headed into Canada for the first time. That was quite interesting.

There’s the border up ahead. You can’t take pictures at the “port” so you have to guess what it really looks like. 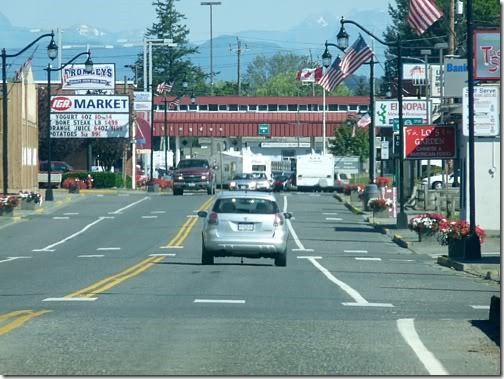 We went through the gate, and because we had things to declare, they sent us inside. What a nightmare that was! I think the guy was an anti-gun fanatic or something, because he really gave us a hard time over the fact that we own guns, but “supposedly” didn’t have any handguns that we were trying to sneak in with us. The guy was just really, really not nice at all. After harassing us over the guns we don’t own, then he didn’t want to let Jeff in because he didn’t have a passport. The army gives dependents passports, but requires the soldiers to travel with their military ID and orders. Thank goodness we had Jeff’s birth certificate, or they wouldn’t have let us in!

So the whole customs thing really didn’t give us a good first impression of Canada.

Next we headed to Wal-Mart to stock up on groceries…only “super Wal-Mart” in Canada don’t really carry groceries. But it wasn’t a wasted trip….Jeff immediately got a fishing license for British Columbia….priorities, of course.

Then we headed out on the highway, keeping an eye out for a grocery store. When we finally found one, I about choked on the prices!!! $28.40 for a package of chicken wings that would have cost me about $7 at home? Jeff and I looked at each other, and decided that all of our “stays” in Canada were going to be dropped down to one night. We needed to get through to Alaska as soon as possible.

So we got on the road…and were “Wow-ed” by the natural beauty of the mountains. Just gorgeous. 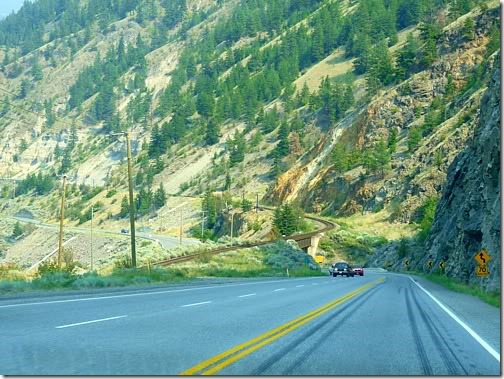 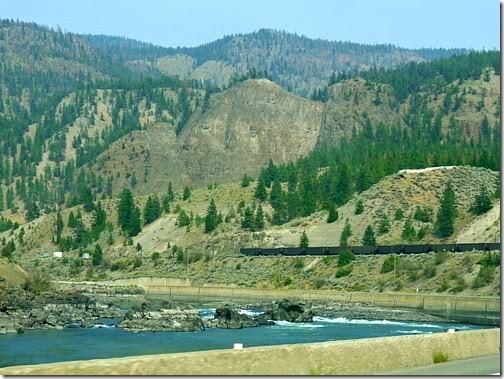 But the further we drove, the more barren, and brown and dry and HOT it got. Our first stop in Canada was to be the area of Cache Creek. As were were driving down the highway, at one point we saw a sign that said, “Check your Fuel” as there were no more gas stations for a good 80 miles. We checked ours, and we knew we were fine, as we could drive 50 miles beyond the next gas stop.

Or so we thought.

This is where the really scary part of our trip came in. The further we drove, the more our gas mileage dropped. First we were going to be able to drive 50 miles past the next station. Then 30. Then 12. Then we were going to break even. And then it was worse.

The temperatures outside were well over 105 degrees. It was HOT. And finally we reached a point where we knew we weren’t going to make it. All I could think was, we are out here in the middle of NO WHERE, with no cell phone service at all, and we were going to run out of gas. We finally stopped at a rest stop, and assessed what to do.

We were several miles from Cache Creek, where the next gas station was. We knew that according to our van, we were going to run out of gas 12 miles from town. We decided that we had no options but to drive until we couldn’t.

We drove down the highway, with the air conditioning off, in complete silence. And some how, we made it all the way to that gas station without the engine cutting off. Our van should have died at least 12 miles before we reached Cache Creek. So when I say God was with us on this trip, I mean God was with us! There is no way we should have reached it. But we did.

So we filled up with gas, got some Canadian cash from the ATM machine and headed to the nearby campground. Our first stay was at Juniper Beach Provincial Park. It was beautiful. The boys loved the fishing. 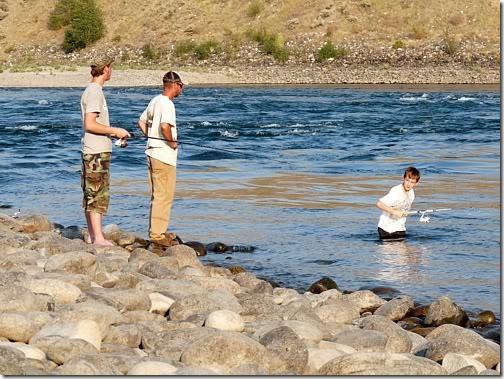 So after the unpleasant experience at customs, the sticker-shock of the prices and the VERY SCARY “almost out of gas” experience, we really needed something to let us know that Canada wasn’t all bad. And we met the very sweetest people that evening. Shelly & Howard were our next door camp-neighbors. So friendly and nice. So Canada wasn’t all bad after all. Thank goodness!

This was the view at this park. 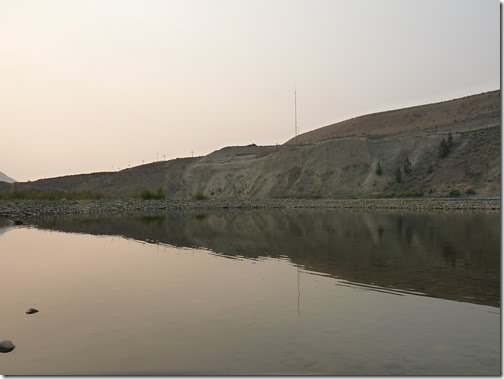 The next morning, Jack took this picture. 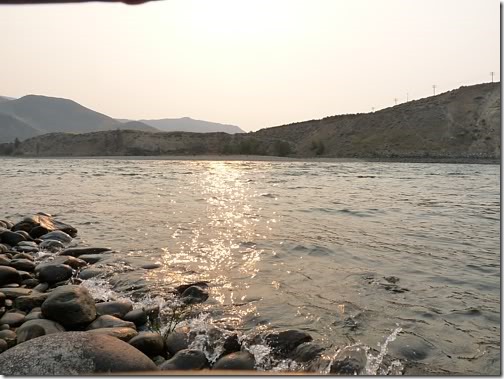 The really cool part, was in the morning, we got up, and you could see THOUSANDS of salmon heading up river. How cool is that?! 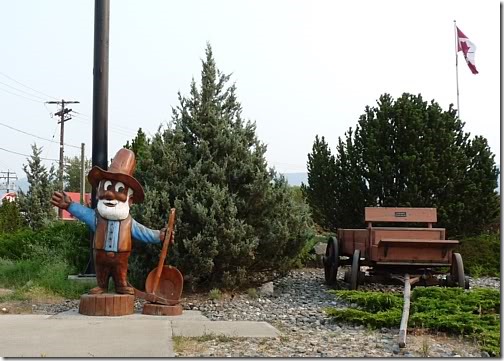 The next day we headed north again…