Learn how to make perfectly crispy potatoes and the tips for cooking in cast iron.

I add several new posts every week – Sign Up for the Free Newsletter and Never Miss a Thing!

To make these Crispy Potatoes, you will need:

How to Cook in a Cast Iron Skillet

Cooking in a cast iron skillet is daunting for some, but it doesn’t have to be. There are a few key things to know. Once you do, food doesn’t stick, it crisps up beautifully, and cast iron cooking will be your favorite!

The only exception is if you are cooking something that requires a dry skillet, such as when you toast nuts or make my Homemade Tortillas.

Don’t move the food. Once you place the food in the hot skillet, don’t rush to turn or stir it!

When food goes into the hot skillet and begins to brown, it shrinks away from the surface of the skillet. When it is ready to turn over or stir, it will release by itself.

You May Also Like: How to Season, Care for, and Restore Cast Iron

When you go to move food, like the potatoes, test with a single piece and see if it is ready. If it doesn’t move immediately, give it a little more time. Be patient.

The food should be dry. When you are trying to get a nice crispy, brown sear on the surface of your food, you want it to be dry. Blot your food with paper towels or let it air dry for a few minutes. Moisture is the enemy of a crispy sear.

Salt your potatoes after you cook them, because the salt will draw moisture from the potatoes and work against you.

Get a printable version of this recipe below.

Did You Make This Recipe? I would love for you to rate it in the recipe card, and I’d love to hear your thoughts! 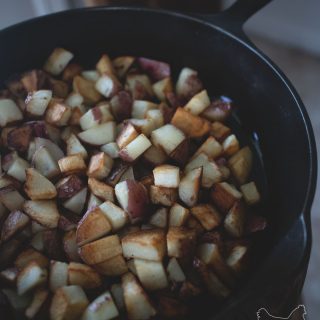