Absolutely heavenly loaded baked potato soup. This soup is everything you love about baked potatoes. 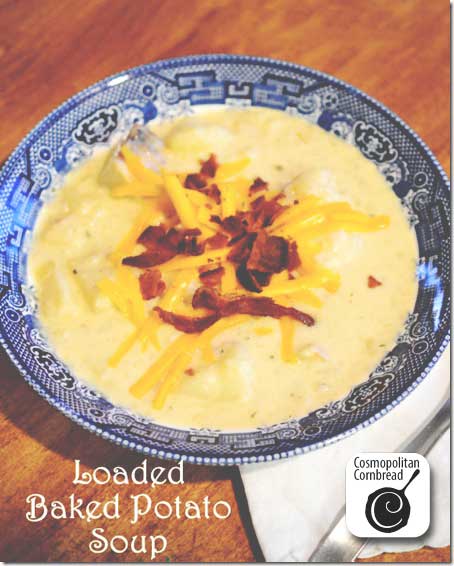 Loaded Baked Potato Soup is one of my favorite soups, and is perfect on a cool night. The potatoes can be baked ahead of time, making prep time in the evening much shorter. Wouldn’t you enjoy a bowl of this after a long day?

When I was a kid, I hated potatoes. I really, really, HATED potatoes. So when my grandmother would offer me her famous potato soup, I quickly declined every time. As I got older, my tastes changed, and while I am still not a huge fan of mashed potatoes, I do like lots of potatoes now. One day I was in a restaurant with my hubby for a date/lunch, and tried some potato soup. I died and went to heaven.

And I wished I had tried my Grandma’s Potato Soup.

After that, I started trying out recipes, and came up with one that we all liked…even my “soup-hater.”

To begin, you’ll bake 5 or 6 large russet potatoes (about 4 to 5 lbs). Simply wash them, poke them with a fork, rub the outsides with a little vegetable oil. Place them on a baking sheet and bake at 375 for about an hour, or until a knife inserted in the center can go in easily. Allow them to cool at least until they are easy to be handled – or do this ahead of time.

In a skillet, cook up some bacon until crispy – about 8 slices. Place the bacon on a plate lined with paper towels. Cut or crumble the bacon, and set it aside. Take about 2 tablespoons of the bacon drippings, and place them in your Dutch oven. 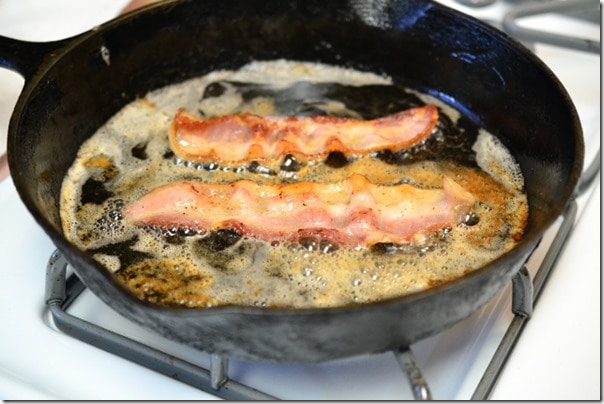 Dice up a large onion and mince 3 cloves of garlic. Sauté them in the Dutch oven until tender, and a little color develops. 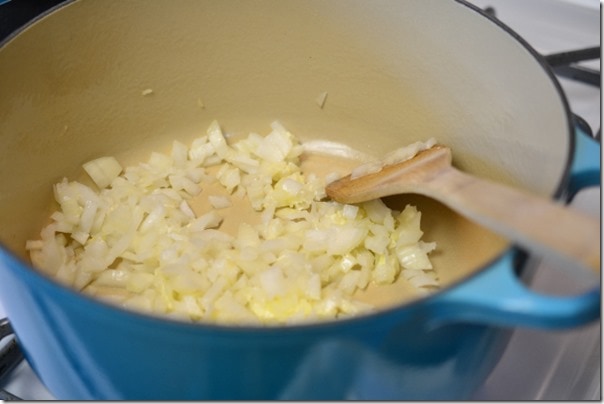 Meanwhile cut half of your potatoes open and scoop all of the potato out. The other half you want to simply peel, so you can cut the potatoes into chunks. 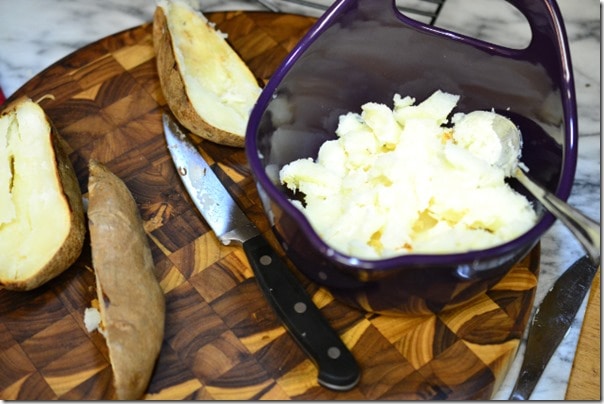 When the onions are ready, add in 2 tablespoons of butter, and let it melt. 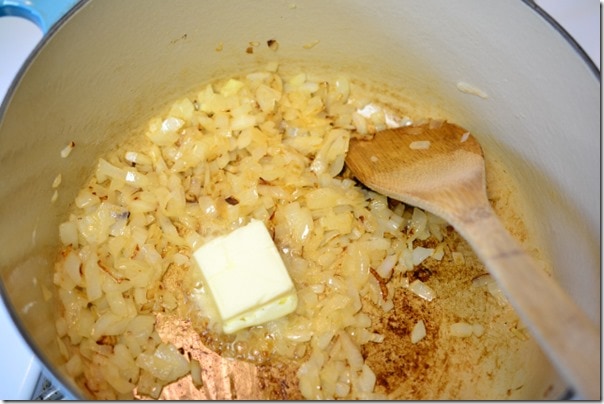 Stir in 3 tablespoons of flour. Let it cook for just a minute and get bubbly. 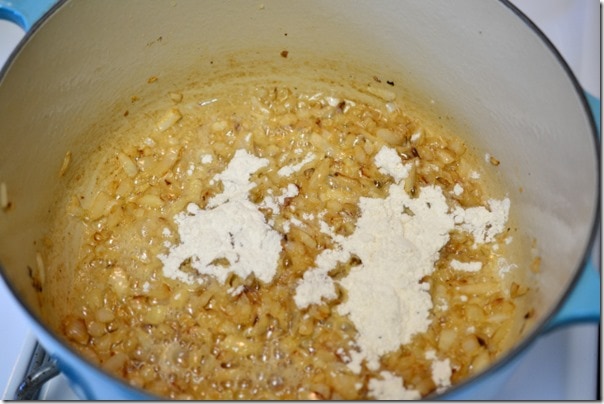 Pour in 2 cups of chicken broth, 2 cups of milk, and 1 cup of half and half. Have your Dutch oven over medium heat. 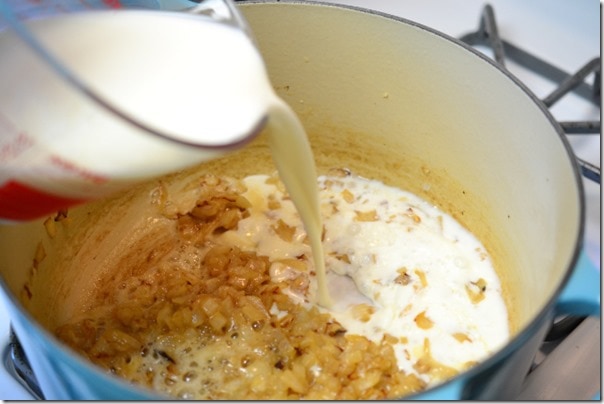 Next, add in the potatoes that had been scooped out of the peels. 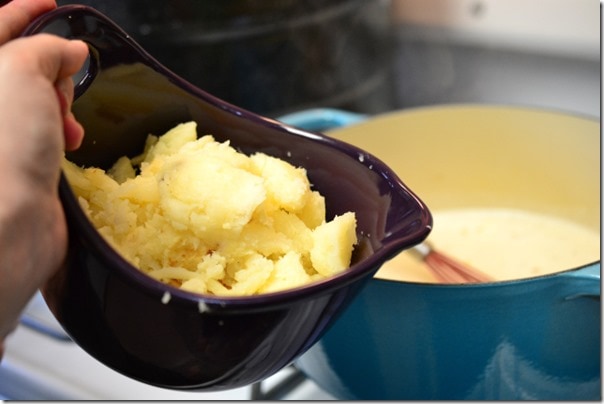 With a potato masher mash up the potatoes in the soup, as best you can. Let this cook a few minutes, and begin to gently boil. Reduce the heat a little. 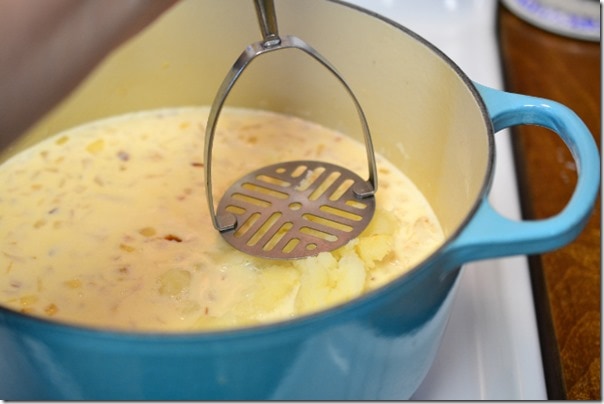 Add in 1 cup of shredded sharp or extra sharp cheddar cheese. Stir it in and let it melt into the soup. 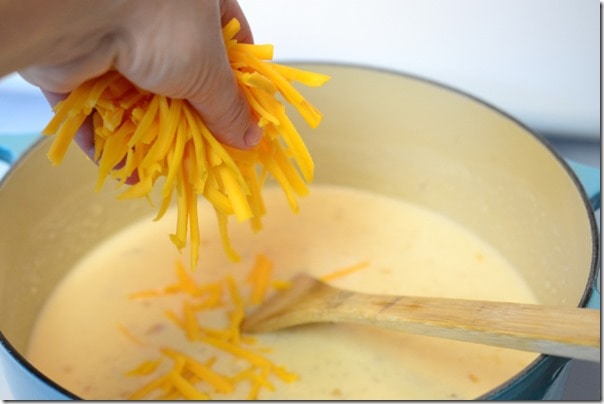 Grab your chunks of potato, and stir them in. Let it cook just a couple minutes, or until the potato chunks are heated through. 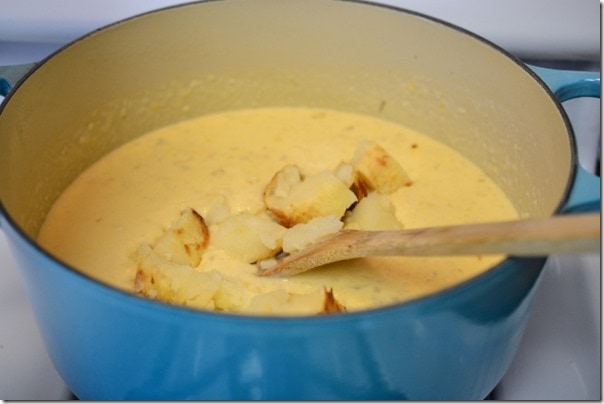 Stir in some salt & pepper to taste (about 1/2 tsp each), along with a teaspoon and a half of dry parsley. 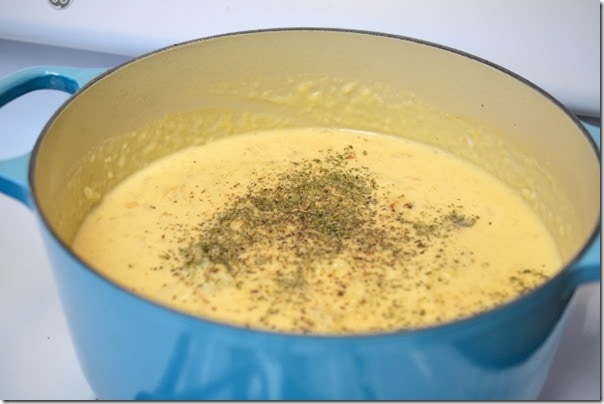 Serve the soup topped with some additional shredded cheese and the bacon. 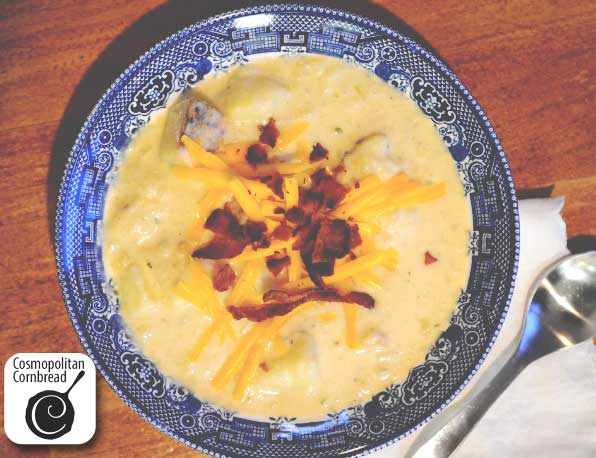 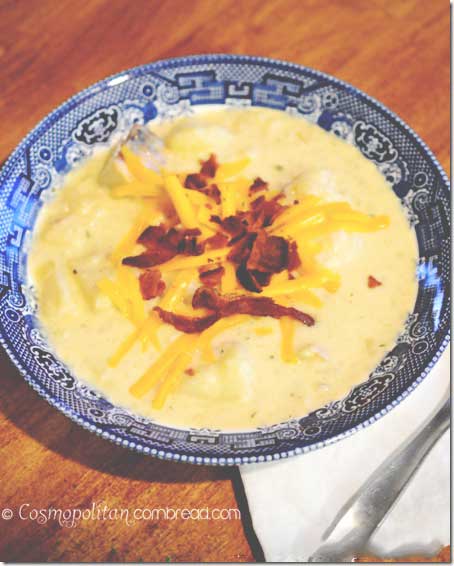 * The potatoes can be baked ahead of time, making prep time for a weeknight ideal. * If half & half isn't handy, you can simply increase the milk to 3 cups.

Nutritional Disclaimer: Nutritional data is provided as a courtesy and estimated by a service called Nutritionix. That is a web-based nutritional calculator and is not guaranteed to be accurate. If the nutritional information is vital to you please verify it using your favorite trusted source.