As you are probably aware, there are many traditions out there involving New Year’s Eve and Day.

[ Visit Here for an article about Southern New Year’s traditions ]

But I thought I would tap into my German heritage with this recipe. This soup is traditionally served on New Year’s Eve.

I add several new posts every week – Sign Up for the Free Newsletter and Never Miss a Thing!

It starts with your basic onions and garlic, sauteed for a minute in some butter.

Add in a good bit of stew meat. This batch was made with beef, but you could make this with pork or venison, or even a combination if you like.

Those will all slow cook together with some veggies, seasonings, broth and red wine for up to 2 hours.

When the meat is super tender, it’s time to add in some potatoes. Ordinarily you would cube up some yellow or red potatoes, but I happened upon these adorable, bite-sized potatoes at the store and couldn’t pass them up.

The baby potatoes went into the pot whole, saving me the step of cutting up potatoes.

And a little while later, you have a rich, hearty stew. This stew is easily made in a paleo variation, and I have included those instructions in the recipe below.

Serve this soup with some homemade Brotchen!

Did You Make This Recipe? I would love for you to rate it in the recipe card, and I’d love to hear your thoughts! 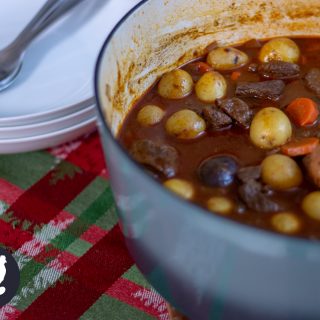 This recipe can also be made with venison or moose instead of beef, if you have a hunter in your family.